Having successfully delivered its aims and objectives as a cardiovascular-focused National Institute for Health and Care Research Biomedical Research Unit (NIHR BRU) for a decade (2007-2017), the partnership was awarded in 2016 ~£6.5m and the prestigious status as a NIHR Biomedical Research Centre (BRC); the BRC went live in April 2017.

The BRC continues the work of the successful BRU with particular emphasis on world-leading translational genomics relating to inherited common and rare disorders and the development of diagnostic and therapeutic cardiovascular devices and innovative trials and continues to enjoy the support of a series of ‘cross-cutting’ themes encapsulated within the Barts BioResource.

Our translational genomics research platform is exceptional with one the largest rare inherited disorders clinical services. Our strategy capitalises upon the 100,000 Genomes Project, which suggests 25%-45% may get a diagnosis from a whole genome sequence and will need the experimental medicine potential of multi-omics and deeper phenotyping of this BRC’s Human Laboratory to provide a diagnosis and examine the therapeutic potential.

This research theme aims to exploit the potential of translational non-invasive/implantable devices by contributing to the establishment a UK based one-stop device centre that integrates a faculty of world-leading academics, bio-engineers, and industry partnerships in collaboration with Yale University, USA. This approach will enable us to take devices from the drawing board, through prototype and into humans offering UK patients the earliest possible benefits with the entire development pipeline ready for academic/industry collaboration.

Launched in October 2014, the Barts BioResource (BBR) is a rapidly growing medical research initiative and at December 2017, acknowledged as the Clinical Research Network (CRN) North Thames ‘Top-Recruiter’ and as a major contributor in respect of the National Rankings. The BBR is primarily funded by the BRC and is an accessible information resource of patient donated healthcare data and biological samples for use in the development and undertaking of cardiovascular-based research opportunities with a view to them being translated into improved healthcare services and patient outcomes. All BHC patients are offered the opportunity to take part in a range of research initiatives with a dedicated team research team on hand to recruit them. Patients who agree to become part of the BBR consent for their healthcare data and/or biological samples to be used for clinical research studies and to be recalled as appropriate to participate in the same. The BBR is home to one of the UKs most cutting-edge advanced cardiovascular imaging and bioinformatics facilities with its infrastructure based on a state-of–the-art multi-petabyte data centre platform.

In 2017, the NIHR National BioResource (NNBR) undertook a strategic review of its structure prompting a decision to invite NIHR BRCs and CRNs to submit an ‘Expression of Interest’ (EoI) in becoming one of their national recruiting centres. The NNBR has a similar set of aims and objectives to that of the Barts BioResource but on a national scale and across a wider-range of clinical specialties. The BRC submitted a successful EoI and in January 2018 became a national centre of the NNBR with an initial focus on recruiting cardiovascular patients. By maximising its scale, experience and resources, the BRC is ideally placed to support this important national research initiative.

To offer a comprehensive and inclusive range of opportunities to patients and members of the public so that they can engage with and get involved in areas of cardiovascular research of interest to them; such opportunities would also aim to be of interest clinicians, academics and society as a whole. 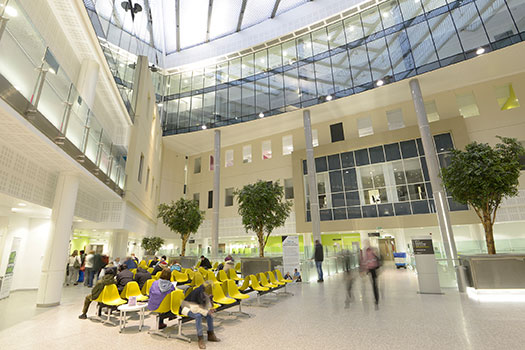