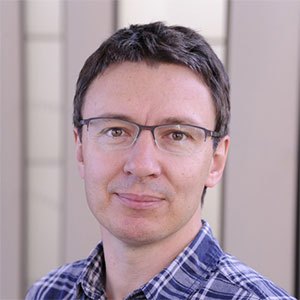 Professor Damian Smedley holds a B.Sc. in Biochemistry from Bristol University and PhD in Biochemistry from Cambridge University. Following postdoctoral research as a Kay Kendall Research Fellow at the Institute of Cancer Research and Imperial College, involving identification and characterisation of chromosomal translocations in haematological cancers, he pursued a new, purely computational research career via a M.Sc. in Bioinformatics from Birbeck College. At the European Bioinformatics Institute (EBI) he contributed to the BioMart software system evolving from the advanced query interface of Ensembl to a federated, data management system used by multiple resources worldwide. He then founded and led the mouse informatics team at the EBI before a 3 year spell at the Sanger Institute leading a team of computational biologists linking human disease to the emerging data from the Mouse Genetics Programme and the International Mouse Phenotyping Consortium (IMPC). In 2016 Professor Smedley joined the William Harvey Research Institute (WHRI) where his research team continues to work on the IMPC as well as development of the popular Exomiser package for phenotype-aware analysis of rare disease genomes as part of the Monarch Initiative. From 2016-2018 he served as Director of Genomic Interpretation for Genomics England, helping to deliver the clinical analysis of rare disease samples in the 100,000 Genomes Project and much of his research continues to focus on unsolved rare disease cases from this project.

As a principal investigator for the International Mouse Phenotyping Consortium (IMPC), his team analyses the genotype to phenotype associations emerging from this comprehensive effort to produce the first catalogue of mammalian gene function by knocking out and systematically phenotyping every protein-coding gene in the mouse. Utilising phenotype comparison methods developed with his co-PIs in the Monarch Initiative, his team is able to automatically identify new animal models of known disease genes as well as suggest new candidates for diseases where the causative variants have not yet been identified in human.

This work is extended upon in the Exomiser software package, also developed in conjunction with his collaborators in the Monarch Initiative. Exomiser automates the filtering and prioritisation of coding and non-coding variants called from whole exome or genome sequencing of rare disease families using novel methodologies to prioritise the genes based on the similarity of the patient’s phenotypes to reference knowledge of genotype to phenotype associations from human disease and animal models. This software is widely used by academic researchers, diagnostic laboratories, commercial offering and in large-scale disease sequencing projects such as the US Undiagnosed Disease Network, the UK’s 100,000 Genomes Project as well as being a key component of the ISO-accredited interpretation pipeline for the NHS Genomic Medicine Service.