Who's Who at Queen Mary 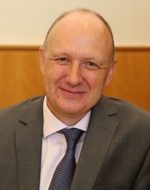 Professor Colin Bailey began his career as an apprentice draughtsman after leaving school at 16.  He worked for construction and consultant companies Lovell Construction, Cameron Taylor Partners and Clarke Nicholls and Marcel.  As an apprentice he gained, through day release and night school, an Ordinary National Certificate (ONC) and Higher National Certificate (HNC-BTec) from Slough and Richmond College respectively.

He was then accepted, through their widening participation programme, to study for a degree in Civil and Structural Engineering at Sheffield University, where he finished first in his year and offered a scholarship to study for a PhD.  Following his PhD he returned to industry to work for the Steel Construction Institute (SCI) and the Building Research Establishment (BRE), where his practical and research experience resulted in the publication of a number of design guides, which are used widely by industry.

He joined the University of Manchester in 2002 as Professor of Structural Engineering, and became Head of the School in 2007. He was then appointed Vice-President of the Faculty of Science and Engineering, before becoming Deputy President and Deputy Vice-Chancellor in 2014.

Over his career he has gained significant non-executive experience, including as a non-executive chair, sitting on the Board of a number charities and organisations.  He is currently a member of the Independent Expert Advisory Panel advising government on building safety following the Grenfell fire.

Colin is author of more than 130 research papers and practical design guides, and has been awarded nine prizes for his research work. This has included the publication of the ‘Bailey’ fire design method, which has been used in design software and distributed to 2,500 companies in 20 countries.

He has also been involved in the structural fire design of number of iconic buildings in London including the Shard, Heron Tower and the Leadenhall Building. He has also been an expert witness on a number of projects, including explaining the collapse of the World Trade Centre 7 Building in 2001, following the terrorist attack.  He is a Chartered Structural, Civil and Fire Engineer and is a Fellow of the Royal Academy of Engineering. He joined Queen Mary as President and Principal in September 2017.

Colin was appointed a Commander of the Order of the British Empire (CBE) for services to Engineering in the 2020 New Year Honours. 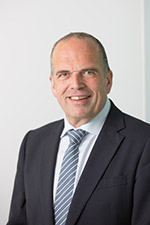 Professor Steve Thornton is the Vice Principal (Health) – Queen Mary University of London, and is a consultant obstetrician at Barts and the London.

Steve qualified from Southampton University in 1983 and undertook his clinical training in Obstetrics and Gynaecology in Newcastle upon Tyne where he started research into the mechanism of human term and preterm labour. His work has particularly focussed on preventing and treating preterm labour given its major implications for the life and health of baby. He obtained membership of the Royal College of Obstetricians & Gynaecologists as well as his MD in Newcastle then moved to an MRC Clinical Scientist post in Cambridge. His work continued on the basic science and clinical aspects of labour. He obtained his first Professorial position at the University of Warwick in 1998 where he continued to undertake research related to preterm labour. 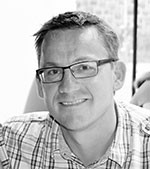 Matthew Hilton obtained his PhD from Lancaster University in 1996. From 1997 until 2016 he worked at the University of Birmingham, becoming Professor of Social History in 2006. From 2011 he was the Director of Research for the College of Arts and Law and then the Deputy Head of College. He has been a visiting scholar at Centre for European Studies, Harvard University and in 2002 was a winner of the Phillip Leverhulme Prize. He served on the REF2014 sub-panel for History, sits on the Advisory Board of the AHRC and is an editor of Past and Present. His research has focussed on the history of consumption, social activism, non-governmental organisations, charities and humanitarianism. His most recent books include Prosperity for All: Consumer Activism in an Era of Globalisation (Cornell, 2009), with James McKay, Nicholas Crowson and Jean-François Mouhot, The Politics of Expertise: How NGOs Shaped Modern Britain (Oxford, 2013) and, with Kieran Connell, On Varna Road: The Photography of Janet Mendelsohn (Birmingham: IKON, 2016). He has co-edited several collections of essays, including The Ages of Voluntarism (OUP, 2011) and Transnationalism and Contemporary Global History (P&P/OUP, 2013). He joined Queen Mary as Vice-Principal for Humanities and Social Sciences in September 2016. 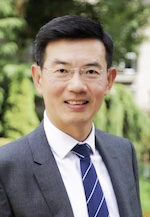 Professor Wen Wang obtained his PhD in Bioengineering at Imperial College London in 1993. Following his postdoctoral research at University of Manchester and his Wellcome Trust Fellowship in the Medical School of Imperial College London, he joined Queen Mary University of London as one of the founding members of the Queen Mary Biomedical Engineering programme and subsequently had his Professorship in Biomedical Engineering in 2003. Supported by a Royal Academy of Engineering Global Research Award, he joined the Department of Chemistry and Chemical Biology at Harvard in 2007 and then worked at MIT on a NIH international project. After his return from the US in 2009, he took on a number of leadership roles at Queen Mary, including Dean of the Faculty of Engineering and Mathematical Science; Dean for Research of the Faculty of Science and Engineering; Head of School of Engineering and Materials Science. He was elected to the Council in 2017 and was appointed the Deputy VP for Science and Engineering in January 2018.

Wen is a Fellow of the American Institute for Medical and Biological Engineering, a Fellow of the Institute of Mechanical Engineers. His work on vascular bioengineering and biomaterials is supported by the Wellcome Trust, the British Heart Foundation, EPSRC and industry. He has more than 120 publications in leading journals, including PNAS, JFM and Circulation. 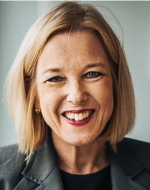 Professor Marshall studied History at the University of York and has postgraduate qualifications in Education Studies from York and Harvard. She is an author of a number publications and articles on academic leadership, teaching excellence, and global challenges in higher education, including four editions as co-editor of A Handbook for Teaching and Learning in Higher Education. She is also a regular speaker at international conferences on teaching excellence and leadership in higher education, teaching and learning.

Stephanie's international reputation has led to her being recruited to serve on the German Excellenz Initiative judging panel, and most recently, to Chair the Norwegian Centres for Excellence Initiative (SFU) judging panel. This includes having an ongoing relationship with NOKUT (Norwegian Agency for Quality Assurance in Education) in terms of providing support for the SFU academic leaders. She introduced the Global Teaching Excellence Award in 2016 and continues to have academic oversight of this initiative. 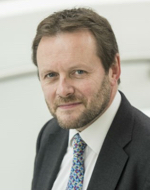 Colin previously worked in a variety of international roles at other universities, as Pro-Vice-Chancellor (International) and Pro-Vice-Chancellor (Internationalisation) at the University of Surrey and the University of Bath respectively, leading research and policy partnerships in South Africa, Brazil, South Korea, USA, China and Jordan. Colin studied applied languages, literature and European Studies at Heriot-Watt University, Edinburgh and took his PhD in literature as a form of political communication at the University of Bath in 1993. He is a professor of human and political communication, with a focus on communication in unstable environments. He has published nine books within his field, and has worked as an academic in the UK, Germany and Brazil.

Colin is a long-standing member of the UUK International Strategic Advisory Board, British Council Education Advisory Group, and Going Global Steering Committee, and was UUK lead for Latin America from 2014 to 2017, taking several national delegations to South America. He was elected Chair of the Russell Group International Forum in 2017. 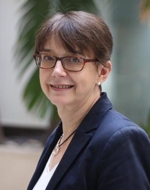 Dr Philippa Lloyd began as Vice-Principal for Policy and Strategic Partnerships in January 2019. Previously she was Director General of Higher and Further Education at the Department for Education.

Philippa is a physicist by background with a PhD in atmospheric physics. She began her career as an editor on the science journal, Nature and first joined the Civil Service in the former Office of Science and Technology. While in Government, she held a variety of policy and corporate roles and acted as Principal Private Secretary to three Secretaries of State.

Philippa took up the post of Director General, People and Strategy in September 2012 in what was then the Department for Business, Innovation and Skills. In July 2016, responsibility for higher and adult further education was moved to the Department for Education, where she became the Director General responsible for higher and further education post-16.

Jonathan joined Queen Mary from the University of Roehampton, where he had held the position of Academic Registrar since 2009.

He holds responsibilities for matters relating to corporate and academic governance, including the management of academic quality and standards, academic regulation, registry services, admissions, the Student Information System (SIS) and information compliance

Jonathan led the strategic direction of the University of Roehampton's Academic Registry, heading a staff of almost 100 working in the university's central administration and across academic schools and departments. His key achievements included the implementation of a new administrative structure for the university, leading to significant economic savings and a more consistent and professional approach to academic administration across Roehampton. Under Jonathan's leadership, the department introduced a paperless admissions system, overhauled the university's student records and supported a successful QAA Institutional Review. 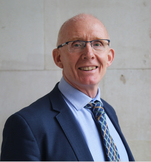 Professor Andrew Livingston is an internationally renowned chemical engineer who joined Queen Mary in November 2019 from Imperial College London, where he was Professor of Chemical Engineering.

With more than 300 publications and 20 patents to his name, Andrew has been recognised for his work on a number of occasions. In 2006 he was elected to the Fellowship of the Royal Academy of Engineering, and in 2008 the Academy awarded him a silver medal for contributions to British engineering. His research into separations was awarded the Underwood Medal of the IChemE in 2016.

He leads a research group whose interests span the fabrication and application of molecular separation membranes. The Livingston Group enjoys outreach and public engagement, regularly contributing to the Imperial Festival and Imperial Fringe.

Professor Livingston also has experience in industry and translational activities, having founded spin-out company Membrane Extraction Technology, which was acquired by German chemical major Evonik in 2010. He is CEO of chemical synthesis start-up Exactmer, founded in 2017. 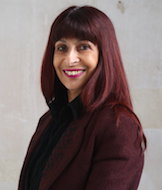 Sheila Gupta studied History and Politics as an undergraduate and has post graduate qualifications in Management Studies and Human Resource Management. She began her career in Local Government at a time of major policy changes including Compulsory Competitive Tendering and Local Management of Schools, providing her with firsthand experience of managing complex change. She assumed her first role in Higher Education (HE) in 1990 and has subsequently worked in institutions spanning pre and post 92s, specialist institutions and the Russell Group, either as Director of Human Resources or equivalent. Her most recent experience was at the University of Sussex, where she was also a member of the University Executive Group; prior to which she was at the Universities of Cambridge and Edinburgh.

She has been invited to speak at  Conferences in the UK, Europe and the US, on topics relating to good governance, talent management, embedding equality and diversity into leadership development programmes and advancing gender equality.

Sheila is also a former Chair of the Russell Group HR Directors Forum and Universities HR, the professional body for HR professionals in HE. In 2006, she received an MBE for services to Higher Education and became a Leadership Foundation Fellow for Higher Education. She also served as an Independent Member of the Education Honours Committee for six years.

A tribute to Professor Peter McOwan

Read memories of and tributes to Professor Peter McOwan, including the eulogy delivered by President and Principal Professor Colin Bailey at his funeral.