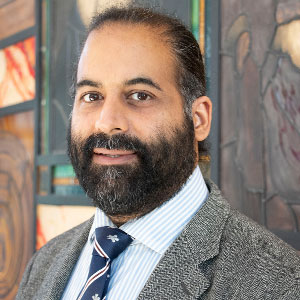 He completed postgraduate training at St Thomas’ and St Bartholomew’s hospitals and was awarded his PhD under the supervision of Professor Amrita Ahluwalia at the William Harvey Research Institute, investigating the effects of inorganic nitrate on the human cardiovascular system.

Since 2015, he has been a senior lecturer at WHRI and consultant in the Barts BP Centre of Excellence at Barts Heart Centre. He is heavily involved in leading therapeutics and prescribing training for the MB BS (Medicine) course and also leads a module for the final year BSc Biomedical Sciences degree course.

Inorganic Nitrate in Cardiovascular Disease
A major research focus of the Vascular Pharmacology group at WHRI, led by Prof Amrita Ahluwalia, is the study of the bioactivity of the reductive nitrate-to nitrite to NO pathway in humans, often dubbed the enterosalivary circuit of inorganic nitrate.

Made the first demonstrations of the protective effects of inorganic nitrite against myocardial ischemia-reperfusion injury implicating two enzymes in the conversion of nitrite to NO: xanthine oxidoreductase and eNOS.

More recently, the vasodilator activity of nitrite has attracted much attention. In 2008, published the first findings that a dietary nitrate load, in the form of beetroot juice, reduces blood pressure and improves platelet and endothelial function in healthy volunteers. Similar results have been confirmed in longer term studies in patients with hypertension and hypercholesterolaemia.

Defined a new syndrome of multi-drug intolerant hypertension to describe the 10% of patients referred to Barts BP Centre of Excellence who are unable to take guideline-based treatment for hypertension due to both pharmacologically expected and unexpected adverse effects. Published the first evidence in this difficult to treat group having developed a unique, pragmatic approach using a 4-step algorithm based on parallel evidences about dose-dependency of treatment and adverse effects; excipients causing adverse effects; and using off-label use of licensed medications for their anti-hypertensive effect.