If you are a potential volunteer interested in participating in one of the trials we are running please see: Clinical trials in Vascular Pharmacology.

Amrita Ahluwalia obtained a BSc in Pharmacology from Bath University and undertook doctoral training at the William Harvey Research Institute (WHRI). In the mid-nineties she worked at St George's Hospital Medical School with Professor Patrick Vallance followed by University College London as a Lecturer before returning to the WHRI where she is currently a Professor of Vascular Pharmacology. Amrita was Deputy Director of the WHRI from 2013-2016 and then Director from 2016-2020. Her interests revolve around developing therapeutics targeting inflammation in the cardiovascular system for which she has won awards e.g. GSK Prize in Clinical Pharmacology 2012, WISE 2015 Prize for Research). In addition to her research she is committed to establishing equality in the workplace. Amrita established the first National mentoring scheme for women of a learned society (British Pharmacological Society) in 2005. She was also the first Chair of the Women in Pharmacology Committee of the same society from 2007-2010 that established the Astra Zeneca Women in Pharmacology Prize and led the award of the first Athena Swan Silver prize for Barts & The London Medical School. Amrita is the first female EiC of the internationally leading British Journal of Pharmacology (2016-current).

Amrita is currently Lead of The Vascular Pharmacology Group, Director of the Barts Cardiovascular Clinical Trials Unit and Editor In Chief of The British Journal of Pharmacology.

Prof Ahluwalia is the Director of the Cardiovascular Clinical Trials Unit (CVCTU), a branch of the Barts Clinical Trials Unit (a UK Clinical Research Collaboration (UKCRC) registered unit). Under Prof Ahluwalia’s leadership, the CVCTU has been established to manage and coordinate clinical trials with robust systems to ensure the highest quality standards of conduct and delivery of cardiovascular clinical trials and is funded by the Barts Charity Cardiovascular Research Programme.

As Director, Prof Ahluwalia as the CVCTU Steering Committee Chair, leads the strategic development, vision and work of the CVCTU, including;

Vascular Pharmacology Group
The main research focus of my group is the exploration of the impact of inflammation on cardiovascular function and the mechanisms involved in this phenomenon with a view to identifying novel targets and therapeutics. The group has four key areas of interest:

1. Effects of nitrite and nitrate on the cardiovascular system in health and disease
A major research focus of the group is study of the bioactivity of the reductive nitrate-to nitrite to NO pathway in humans, often dubbed the enterosalivary circuit of inorganic nitrate. We made the first demonstrations of the protective effects of inorganic nitrite against myocardial ischemia-reperfusion injury implicating two enzymes in the conversion of nitrite to NO: xanthine oxidoreductase and eNOS. More recently, the vasodilator activity of nitrite has attracted much attention. In 2008 we published our findings that a dietary nitrate load, in the form of beetroot juice, reduces blood pressure and improves platelet and endothelial function in healthy volunteers. We are currently investigating the effect of a similar inorganic nitrate load in hypertensive and hypercholesterolemic patients and with Anthony Mathur the potential of intracoronary nitrite in patients suffering an acute myocardial infarction.

2. Role of the kinin B1 receptor in cardiovascular disease
Ahluwalia & Perretti in 1996 published findings demonstrating the key role of the inducible kinin B1 receptor in neutrophil recruitment to a site of inflammation. Our research has focussed on the molecular pathways involved in this response and we have identified two particular pathways that play a role i.e. B1-induced endothelial chemokine generation and sensory C-fibre activation. Our most recent studies have demonstrated that laminar shear stress plays a major role in regulating endothelial kinin B1 receptor expression and that this regulation implicates the receptor in atherosclerosis.

3. Sex differences in cardiovascular function and susceptibility to cardiovascular disease
In 2005 Ahluwalia and Hobbs published the findings demonstrating that endothelium-dependent relaxation of the resistance arteries of females is predominantly mediated by the endothelial factor endothelium-derived hyperpolarising factor, EDHF, whereas in the resistance vessels of males NO and the prostaglandin PGI2 are the primary endothelial factors. We also demonstrated that this propensity to express EDHF protected females from genetically-induced hypertension and protects females from inflammation. We have speculated that these differences may have a role to play in the reduced susceptibility of females to cardiovascular disease. We are currently investigating the pathways involved in this sex-specific upregulation of EDHF and reduced inflammatory responses in healthy volunteers to determine the relevance of our findings in pre-clinical models to humans.

4. Investigation of the role of TRPV1 in vascular reactivity
In 2004 we identified a major role for the TRPV1 channel and sensory C-fibres in mediating the constriction of resistance arteries that occurs in response to rises in intraluminal pressure; termed myogenic tone. We are currently investigating the molecular pathways involved in this response, in particular our observations have identified the arachidonate metabolite 20-hydroxyeicoasteraenois acid as an important TRPV1 activator. 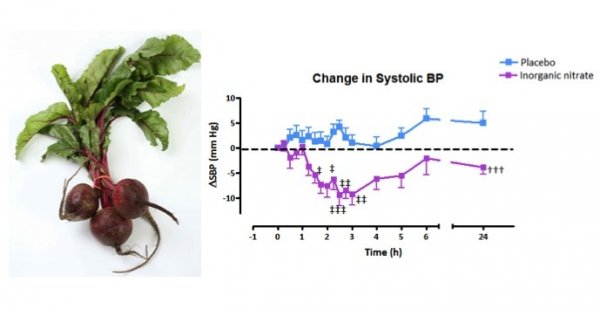 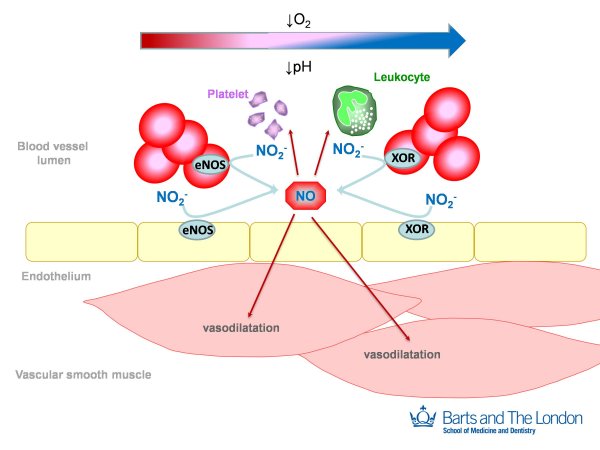 Within the blood vessel nitrite conversion to NO increases progressively with decreasing pH and oxygen tension. Our evidence suggests that both eNOS and xanthine oxidoreductase (XOR) are two key enzymes that act as nitrate reductases and are localised to both the endothelium and the red blood cell.