"Probing fundamental properties of the neutrino at the SNO+ Experiment"

This project is funded by the European Research Council seventh framework "ideas" programme with a Starting Grant. November 2011 - March 2017.

The project is split into four work packages:

The aim of this package is to use an embedded light injection system consisting of collimated optical fibres and lasers to characterise the scattering and other optical features in the SNO+ detector. Laser light of different wavelengths will be injected through 12 different fibres that sample different paths across the detector in an effort to decouple the various complex optical effects (scattering, absorption, reemission, reflections). It is imperative that we have a good understanding of the optics of the liquid scintillator as these effects directly impact on the amount of scintillator light measured and hence the energy response of the detector.

We have now developed a robust analysis for water data, including a full systematics study, which is ready to apply when the detector is full of water and are working towards the more detailed analysis required for scintilaltor data where absorption and reemission has a significant effect. This work has been presented in posters at NuPhys2013 and 2014 and we are working towards a detailed paper on the whole scattering module hardware and analysis of water phase scattering.

The aim of this package is to develop a calibration source to be deployed in the SNO+ detector that emits electrons as opposed to Gamma radiation. Most calibration sources utilise gamma radiation as it is more penetrating and can be easily contained within a deployed source. Electron sources are challenging as the electron energy is easily attenuated as it leaves the source housing. However, since the signals in SNO+ will be produced by electrons, not gammas, it would be highly desirable to be able to calibrate directly with electrons. Furthermore, electrons do not travel as far in scintillator  giving a compact source for testing our reconstruction algorithms. We are developing a contained source of 90Y for this purpose - a pure beta emitter with an endpoint of 2.2MeV and a half-life of 64 hours.

We have developed a technique to contain liquid 90Y droplets in micro-capillaries allowing the betas to escape into the scintillator volume with minimal attenuation. The capillaries have been tested in a small bench-top setup at the University of Sussex and a larger 5 gallon tank at the University of Pennsylvania. A second batch of capillary measurements was conducted in February 2015, comparing the beta response to those from gamma sources and utilising a cosmic ray veto for different scintillator mixtures. Having conducted a risk assessment for deploying an 90Y source in the SNO+ detector, we are also conducting a study to understand how much we can learn about the scintillator response to betas with an external setup to SNO+. Furthermore, guided by our findings from the 90Y source, we are developing analysis tools to utilise the signals from residual radioactive activity within the scintillator volume in order to calibrate the detector response. This approach reduces the need to deploy calibration sources within the detector, with an associated risk of contamination.

The liquid scintillator target allows us to detect solar neutrinos down to very low energies (<1MeV) provided we can effectively remove low energy backgrounds from the detector. This gives us the opportunity to measure neutrinos from the pep interaction in the Sun and possibly also from the CNO reaction. SNO+ is in a unique location 2km underground in the Vale Creighton Nickel mine which means the C11 background due to interactions of cosmic ray muons in the scintillator is extremely low and will not affect the signal. Accurately measuring the pep flux will allow us to test neutrino oscillation models and search for new physics processes.

Critical to the solar analysis is a full understanding of backgrounds in the detector, down to energies as low as ~0.1MeV. The group have been heavily involved in background studies, including

Early scintillator data may prove to be very interesting for the solar analysis as we can start to assess the level of intrinsic backgrounds in the vessel, so we are working to develop analysis tools to study the 'partial fill phase' when the detector is being filled with scintillator (scintillator entering at the top, water withdrawn at the bottom of the acrylic vessel).

Neutrinoless double beta decay is a golden-channel to test whether the neutrino is a Majorana particle that can essentially act as its own antiparticle. If observed it would also tell us about the absolute neutrino mass scale. SNO+ will deploy a large quantity of Tellurium 130 in the scintillator volume to perform this measurement.

Similar to the solar analysis, a full understanding of all possible background contributions and the development of rejection techniques for events in the signal region of interest (around the 130Te BB endpoint of 2.5MeV) is critical for a successful measurement. The group are heavily involved in studies to characterise and reduce the background model. In addition, we are performing detailed studies to assess the affect of various detector systematics on the sensitivity of the double beta measurement. 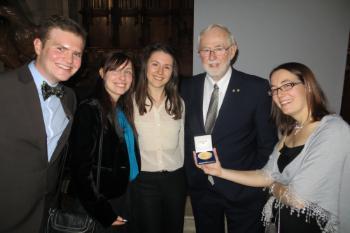