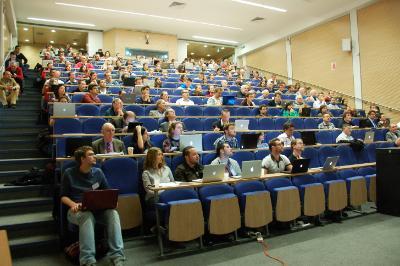 Research in experimental particle physics at Queen Mary University of London (QMUL) has been carried out for over three decades, covering many of the experimental developments in the field. In the 1980's the QMUL Group was part of the UA1 Experiment that discovered the W and Z particles and for which the 1984 Nobel Prize was awarded. In the 1990s the Group was part of the OPAL Experiment that studied the W and Z particles in great detail and established that there are only three types of light neutrino and hence probably only six quarks and six leptons. The work in the field of Flavour Physics at the BaBar experiment (1999-2008) has led to the 2008 Nobel Prize in Physics awarded to Kobayashi, Maskawa, and Nambu for their work on symmetry breaking and CP violation. In 2012, the QMUL-ATLAS Group contributed to the discovery of the Higgs boson.

The broad research programme is made possible by excellent interaction between research groups, who promulgate their enthusiasm via seminars and specialised discussion groups, as well as by day-to-day informal discussion. Visitors can spend time working with the groups, frequently funded by the research councils. PhD students are integral members of their research groups and are encouraged to present their work in poster competitions and international conferences. The research groups derive much of their funding from the government's Science and Technology Facilities Council. Additional resources and funding are provided through the European Research Council, the Leverhulme Trust and the Royal Society.