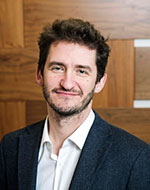 Maksymilian (Maks) Del Mar is Professor of Legal Theory and Legal Humanities in the Department of Law. He is currently the Department’s Director of Graduate Studies.

As an undergraduate, Professor Del Mar studied law, literature, and philosophy, completing a BA (Hons I) and an LLB (Hons I) at the University of Queensland, Australia, including an honours thesis in philosophy and literature on Italo Calvino ‘s If on a Winter's Night a Traveller… As a graduate, he completed two doctorates, one in law (on the methodology and meta-theory of legal philosophy) at the University of Edinburgh, Scotland (2009) and one in the philosophy of the social sciences (on a second-person account of social normativity) at the University of Lausanne, Switzerland (2012). While still in Australia, he qualified and worked as a solicitor, as well as serving as a Judge's Associate to the Honourable Justice Margaret White in the Supreme Court of Queensland and leading a professional ethics project at the Queensland Law Society.

Professor Del Mar has broad research interests in legal theory and legal humanities. They include, principally, interests in:

With respect to the first interest, Professor Del Mar has published Artefacts of Legal Inquiry: The Value of Imagination in Adjudication (500pp, Hart, 2020), which develops an account of the importance of imagination for common law reasoning. The book draws on a range of theoretical traditions, including rhetoric, the cognitive humanities, and the philosophy of mind. A short video interview about the book is available on Youtube. Other work has included papers on exemplarity and narrativity, on the rhetorical tradition of declamation, and on emotion experiments. Recently published work has examined the relation between the history of rhetoric and emotion, and on enthymising as an art of rhetorical narrative-making. A strand of this work has focused on the role and value of the arts in legal education, including papers on educating the legal imagination, and on drawing on the visual and dramatic arts to teach case law. Related editorial work has included: The Moral Imagination and the Legal Life (Ashgate, 2013, with Zenon Bankowski); The Arts and the Legal Academy (Ashgate, 2013, with Zenon Bankowski and Paul Maharg); Legal Fictions in Theory and Practice (Springer, 2015, with William Twining); Virtue, Emotion and Imagination in Law and Legal Reasoning (Hart, 2020, with Amalia Amaya); and The Oxford Handbook of Law and Humanities, 2020, with Simon Stern and Bernadette Meyler).

With respect to the second interest, Professor Del Mar is currently working on a long-standing project on the life and work of one of Scotland’s most important twentieth-century legal philosophers and public intellectuals: Neil MacCormick (1941-2009) for the Jurists: Profiles in Legal Theory series. He recently delivered the 2022 Inaugural UK IVR Annual Lecture named in honour of Neil MacCormick: the recording is available here. Other work has included papers on Adam Smith (with a particular focus on imagination and reasoning), on the role of images in the writing of legal theory, the fact-value problem, and a number of papers and chapters on the relations between legal theory and history. Related editorial work includes: Law as Institutional Normative Order (Routledge, 2009, with Zenon Bankowski); New Waves in Philosophy of Law (Palgrave, 2011); The Anxiety of the Jurist (Ashgate, 2013, with Claudio Michelon); and Law in Theory and History (Hart, 2016, with Michael Lobban).

With respect to the third interest, Professor Del Mar has been especially interested in theorising legal reasoning under conditions of pluralism, examining the role and value of metaphors in international law (in particular, in the contexts of customary international law), thinking about the importance of global history for jurisprudence, and reflecting on transnational authority. The work on MacCormick is also relevant here, given the importance of his institutional theory of law for transnational legal theory. Related editorial work includes: Authority in Transnational Legal Theory (Edward Elgar, 2016, with Roger Cotterrell).

Professor Del Mar's research has been funded by the Leverhulme Trust (Leverhulme Research Fellowship), the Arts and Humanities Research Council, the Royal Society of Edinburgh, the Newton Fund, and the British Academy (Mid-Career Fellowship).

Professor Del Mar has served as the Founding President of the Australian Legal Philosophy Students Association (2003-2005); the Founding Convenor of the Edinburgh Legal Theory Research Group (2006-2008); the President of the UK Branch of the International Association of Legal and Social Philosophy (UK IVR) (2013 to 2018); the Founding Director of the Centre for Law and Society in a Global Context (CLSGC) (2013 to 2019); and Founding Co-Convenor of the International Network of Transnational Legal and Political Theory (2013 to 2019). He is a member of the Centre for the History of Emotions and the Centre for the History of Political Thought at Queen Mary.

Professor Del Mar serves as an Editor of the Law-in-Context series at Cambridge University Press, which is a long-standing series committed to contextual legal pedagogy and to theorising law in context. He is also the Founding Editor of a series of ‘Encounters with Books from Other Disciplines‘ in the International Journal of Law in Context.

Professor Del Mar has taught/teaches a variety of courses at Queen Mary, including Contract Law, Jurisprudence & Legal Theory, and optional courses on Legal Reasoning in a Global Context and Law, Knowledge, Power: Past and Present in the Undergraduate degree, and courses on Common Law Reasoning, Visual Jurisprudence, and Historical Jurisprudence in the LLM programme. He recently taught an intensive course on Case Law and the Humanities at the University of Toronto (2022). He has a special interest in the value of the dramatic and visual arts in teaching legal reasoning, having led a pilot project on this topic, funded by the Westfield Fund for Enhancing Student Experience.

At present, Professor Del Mar is working on his second monograph: Reading Neil MacCormick: Legal Philosophy and Common Life, for Stanford University Press, as part of the Jurists: Profiles in Legal Theory series. The project includes a website, containing a timeline, full bibliography, and audio and video resources.

In addition to the above project, a range of work is in progress at the intersection of legal reasoning, rhetoric, and the literary and visual arts, e.g., on: kinesic intelligence and embodiment; on the memory arts; on narrativity; on comedy and argument; on playful pedagogies of legal reasoning; and on the prospects for a political history of legal reasoning.

Historical Jurisprudence and the Methodology of Legal Theory

Professor Del Mar welcomes proposals for supervision in legal theory and legal humanities. He is willing to consider any proposal in these fields, but is likely to be most helpful as a supervisor if the proposal falls within his main areas of research. Proposals in the following broad areas would be especially welcome: