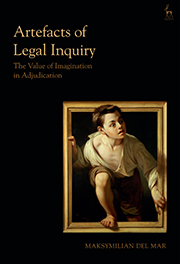 Maksymilian Del Mar, Professor of Legal Theory at Queen Mary University of London, has published a monograph entitled Artefacts of Legal Inquiry: The Value of Imagination in Adjudication (488 pp. Hart, 2020). The book is an interdisciplinary study of the value of ‘artefactual language’ and practices of imagination in the common law tradition.

What is the value of fictions, metaphors, figures and scenarios in adjudication? This book develops three models to help answer that question: inquiry, artefacts and imagination.

Legal language, it is argued, contains artefacts – forms that signal their own artifice and call upon us to do things with them. To imagine, in turn, is to enter a distinctive epistemic frame where we temporarily suspend certain epistemic norms and commitments and participate actively along a spectrum of affective, sensory and kinesic involvement.

The book argues that artefacts and related processes of imagination are valuable insofar as they enable inquiry in adjudication, ie the social (interactive and collective) process of making insight into what values, vulnerabilities and interests might be at stake in a case and in similar cases in the future.

Artefacts of Legal Inquiry is structured in two parts, with the first offering an account of the three models of inquiry, artefacts and imagination, and the second examining four case studies (fictions, metaphors, figures and scenarios).

Drawing on a broad range of theoretical traditions – including philosophy of imagination and emotion, the theory and history of rhetoric, and the cognitive humanities – this book offers an interdisciplinary defence of the importance of artefactual language and imagination in adjudication.

The book has received the following advance praise:

Artefacts of Legal Inquiry is a book of impressive interdisciplinary scope. It seeks to bring into salience aspects of thinking and reading-imagination, metaphor, narrative, affect, sensory and motor response-too often regarded as irrelevant to the high rational ambitions of legal thought and practice. It deserves to be taken seriously by specialists in legal studies, but it will make a significant impact too on literary studies and on cognitive studies in general. – Terence Cave, Emeritus Professor of French Literature, University of Oxford, and Emeritus Research Fellow, St John's College

“This hugely ambitious and imaginative study breaks new ground in understanding the rhetorical and affective underpinnings of common-law reasoning. Drawing on a range of interdisciplinary tools from rhetoric, cognitive literary theory, philosophy, jurisprudence and the close study of case law, Maksymilian Del Mar illuminates the role of fictions, metaphors, figures and scenarios in at once enabling and setting the epistemic limits of practices of judicial inquiry.” – John Frow, Professor of English, University of Sydney

“Del Mar's book is a strikingly original exploration of the complex activity of judging and the modes of reasoning typically employed in law. His approach transcends the conventional limits of the study of adjudication and offers a wealth of fresh and invaluable insights into modes, patterns and practices of legal reasoning. Focusing on the use of “artefacts” of inquiry, e.g. fictions and metaphors, Del Mar offers a compelling argument for indispensable role and value of imagination in legal reasoning. Especially noteworthy is his extended discussion of the interactive, collaborative and diachronic character of legal reasoning.” – Gerald J Postema, Emeritus Professor of Philosophy, University of North Carolina

“Artefacts of Legal Inquiry foregrounds the difficulty of doing justice in adjudication, emphasizing the contingencies and inadequacies of available linguistic resources. Del Mar argues that the use of linguistic artefacts – devices such as fictions, metaphors, figures, and scenarios – both highlights the lacunae in literal assertive language, and provides ways to (tentatively and provisionally) alleviate the problems that result. Such devices, he maintains, are not regrettable crutches, but powerful epistemic tools. Although his focus is adjudication, his argument extends to make a powerful case for the importance of artefacts in all areas of inquiry.” – Catherine Elgin, Professor of Education, Harvard University

“Artefacts of Legal Inquiry is a genuine tour de force. Drawing on legal scholarship as well as on philosophy, psychology, and literary theory, Maks Del Mar develops a comprehensive theory of the practice of inquiry and then applies it brilliantly in the second half of the book to case studies ranging from legal fictions to metaphors. This important and wide-ranging book will undoubtedly be of great value not only to legal scholars and jurists but also to philosophers, and especially to philosophers interested in imagination. The account of imagination that Del Mar puts forth – one that sees it as a participatory way of exploring a distinctive epistemic frame – opens up exciting new avenues for research.” – Amy Kind, Director of The Gould Center for Humanistic Studies and Russell K Pitzer Professor of Philosophy, Claremont McKenna College.