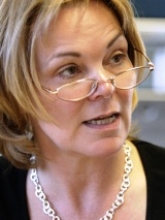 Chair/Director Of The Language Centre, and Director of The Confucius Institute

Working across Queen Mary, Kathryn’s role is to lead on programmes that prepare overseas and home students for undergraduate and postgraduate degrees at the University. She acts as the main ambassador to these programmes, building the University’s reputation both internationally and in the UK. Her responsibilities include overseeing the design and teaching delivery, quality assurance, administration and direction of the programmes, as well as ensuring student satisfaction, achievement and intellectual engagement.

The Language Centre’s programmes are offered at all levels from doctoral to pre-undergraduate: PhD in Applied Linguistics, with a particular focus on institutional discourse; MA in English Language Teaching; MA in Language Teaching; Pre-Masters Graduate Diplomas in Humanities & Social Sciences; Pre-undergraduate Foundation Year, studied either as a standalone programme or integrated into a range of undergraduate degrees; Pre-Sessional summer programmes with pathways for Law, Science & Engineering, and Social Sciences; In-sessional English language and academic study skills modules to support students to academic success; and non-specialist language modules in Arabic, French, Chinese (Mandarin), Japanese, German, Italian and Spanish at beginner, intermediate and advanced levels.

As Director of the Confucius Institute, Kathryn works closely with Queen Mary’s partner universities in China to encourage educational and research collaborations across a range of disciplines. Part of the role of the Director is also to work with Queen Mary’s local community and schools to encourage an awareness of Chinese language and culture.

Kathryn serves on a number of committees at Queen Mary, including Global Strategy Committee, Global Engagement Committee, Transnational Education Working Group, School International Education Committee, Queen Mary Online sub-group, and Immigration and Compliance Working Group. Kathryn is, formerly, a founding member of the non-profit Paris-based association, Women Business Mentoring Initiative, (now Women Initiative Foundation), which promotes the advancement of women in business and in the economy, and which has supported more than 100 women entrepreneurs in scaling up their enterprises.

Prior to her appointment at Queen Mary, Kathryn was Principal Lecturer and Head of the Language Centre at Kingston University, and Lecturer in languages at Southampton University.