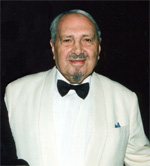 Dr Thomas Barnardo, the Victorian philanthropist who actively sought to rescue destitute children from the streets, became involved in London’s Ragged Schools Movement whilst a medical student at the Royal London Hospital. By 1878, he had established 50 orphanages in London. His legacy continues today through the charity Barnardo’s which works with vulnerable children and young people.

Dr Naim Dangoor (Engineering, 1930) While studying at Queen Mary, Dr Dangoor made a promise to himself that if he were ever to be successful he would give a significant portion of money to support educational causes. He also promised that he would find a way to thank the UK for giving his family refuge after escaping Baatist Iraq in the 60s.

In 2009, Dr Dangoor fulfilled his promise by making a generous £3 million donation over three years to the Russell 1994 Group of universities. The ‘Eliahou Dangoor Scholarships’, worth £1,000 each; will support up to 4,000 students who wish to study science, technology, engineering and mathematics subjects at any of the Russell 1994 Group of universities. Dr Dangoor's donation is one of the largest private scholarships scheme in the UK.