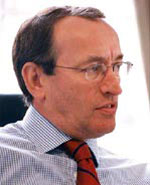 Hong Kong based industrialist and entrepreneur Dr Kei Bui Chan (Electrical Engineering, 1969; PhD, 1973) is Founder, Chairman and Managing Director of Surface Mount Technology Limited (SMT), one of the top electronics manufacturing service providers in the Asia Pacific region. He was made an Honorary Fellow of Queen Mary in 1998.

Frank Chapman (Engineering, 1974) was appointed Chief Executive of FTSE 100 listed BG Group in 2000. Prior to joining the BG Group, he had spent 22 years with Shell and BP.

Sir George Cox (Aeronautical Engineering, 1962), former Director-General of the Institute of Directors (1999-2004), was appointed Chairman of the Design Council from 2004 to 2007. He has had a varied career in information technology, consultancy and research, heading up the company Butler Cox in 1977 until its flotation on the London Stock Exchange. He has also served as Chief Executive of the services businesses of Unisys for the whole of Europe. Sir George has been a Trustee of VSO and was Chairman of the medical charity, Merlin from 2001 to 2006; he is now Chairman of Merlin USA. He was made an Honorary Fellow of Queen Mary in 2007.

Lord David Currie of Marylebone (PhD Economics, 1978), the former Chairman of Ofcom, the UK's communications industry regulator, became a non-executive director at Royal Mail in March 2009. Lord Currie has a long distinguished career in economics with roles in academia, the private sector, regulation and government: he was Reader and Professor of Economics at Queen Mary from 1972 to 1988 and was made an Honorary Fellow in 1996. From 2000-07, he was Dean of the Cass Business School at City University.

Tony Froggatt (Law, 1969) was Chief Executive of Scottish and Newcastle Plc from May 2003 to October 2007. He now holds a number of non-executive directorships including Brambles Industries; Billabong International Ltd and AXA Asia Pacific Holdings Ltd.

Maged Shawky Sourial (MSc Financial Economics, 1997) has been Chairman of the Cairo and Alexandria Stock Exchange (CASE) since 2005, having been Deputy to the chairman for almost a year. He had previously held the position of Senior Assistant to the Minister of Economy and Foreign Trade for Securities Markets for over 10 years.