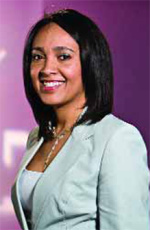 Dr Colette Bowe (Economics, 1969; PhD 1978), was appointed Chairman of Ofcom, the UK communication's industry regulator, in 2009. Dr Bowe has had a varied career in the civil service, private sector and a portfolio of non-executive directorships. She was a member of College Council since 1993, and was Chair of Council from 2004-09.

In 1991, newsreader Jane Hill graduated from Queen Mary with a degree in Politics. Since 1997 she has been a presenter on BBC News 24 and also presents BBC1 weekend bulletins and the One O’clock News.

Professor Sir Michael Lyons (MSc Economics, 1973) was appointed the first Chairman of the BBC Trust, the BBC's new governing body, in May 2007. Sir Michael was formerly chief executive of Birmingham, Wolverhampton and Nottingham city councils and Professor of Public Policy at Birmingham University. He was also a non-executive director of Central Television Ltd and, until recently, Chairman of the Regional Advisory Council for ITV. He received a knighthood in 2000 for services to local government; his knowledge led to him being commissioned to prepare the Lyons Report, a government report on local council funding. Professor Sir Michael was made an Honorary Fellow of Queen Mary in 2003.

Newsreader Bridgid Nzekwu graduated in 1992 with a First Class Honours degree in European Studies (French with German). She is a regular presenter, reporter and producer on the Channel Four News.

Dr Prannoy Roy (Economics, 1973) is one of the most well-known faces on Indian television. Chairman and Director of New Delhi TV (NDTV), he has won several awards as India’s leading presenter of current affairs programmes. Dr Roy has also worked as an Economic Adviser with the Ministry of Finance to the Indian Government. He was elected Honorary Fellow of Queen Mary in summer 2007.

Poorna Shetty (English, 2002) is a freelance journalist and a regular panellist on the BBC Asian Network's radio station. She worked previously as editor of Asiana, the UK's best selling Asian magazine, commissioning editor of The London Paper and features editor of Grazia. In 2007 she was nominated in the media category for a Women of The Future award.