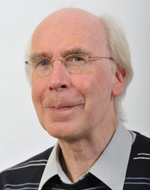 Roger Cotterrell studied law and sociology at the University of London and taught at Leicester University before joining the Queen Mary faculty where he has been Anniversary Professor of Legal Theory since 2005. He was Acting Head and Head of the College's Department of Law between 1989 and 1991, Dean of the Faculty of Laws from 1993 to 1996 and Professor of Legal Theory from 1990 to 2005. He was elected as a Fellow of the British Academy in 2005 and of the Academy of Social Sciences in 2014. In 2013 he was awarded the Socio-Legal Studies Association life-time achievement award for contributions to the socio-legal community.

In addition to the key publications noted on his publications page, Professor Cotterrell has published many articles and essays related to his primary specialisms, sociolegal theory and jurisprudence, as well as on the law of trusts, comparative law, criminology and public law.

Professor Cotterrell has held visiting academic positions at the University of Texas at Austin, Lund University, the Catholic University of Brussels, the University of California at Berkeley, the Onati Institute for the Sociology of Law, the European University Institute and the University of Hong Kong. He is a member of the advisory boards of the Journal of Law and Society [UK], Sociologia del Diritto [Italy], International Journal of Law in Context [UK/USA], Griffith Law Review [Australia], Droit et Société [France], Clio & Themis [France], Studies in Law, Politics and Society [USA], Property Law Review [Australia], Journal of Comparative Law [UK] and Comparative Law Review [Poland]. He was Trustee of the Law and Society Association (USA) (1996–9), an expert assessor for the Flemish Interuniversity Council (2006-7) and for the Danish National Research Foundation (2011), and a member of the UK national Research Assessment Exercise Law Panel (1999–2001) and the RAE Law Sub-panel (2006-8). He served as a panel member for grant awarding competitions of the European Research Council from 2017 to 2019.

Professor Cotterrell's primary current research interests are in legal theory exploring the nature of transnational law, the relations of law, trust, community and culture, the legal sociology of Emile Durkheim and the 'Durkheim School', and relations between the fields of comparative law and sociology of law.

Professor Cotterrell's primary current research interests are in the fields of legal theory exploring the relations of law, trust, community and culture; the history and contemporary significance of the legal sociology of Emile Durkheim and the 'Durkheim School' and relations between the fields of comparative law and sociology of law.