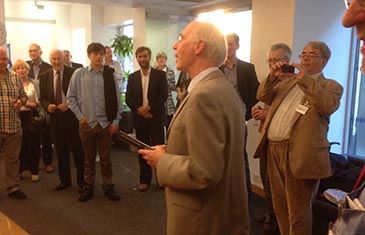 Professor Richard Nobles and Professor David Schiff recently co-edited a book entitled 'Law, Society and Community: Socio-Legal Essays in honour of Roger Cotterrell'. The Festschrift is described by Ashgate, its publisher, as 'a collection of socio-legal essays written by leading theorists and researchers from around the world, that offers original, perceptive and critical contributions to ideas and theories that have been expounded by Professor Roger Cotterrell over a long and distinguished career'. The book consists of the work of 23 socio-legal scholars hailing from nine different countries.

A workshop took place on the 19 September in conjunction with the release and was focused upon consideration of the current standing of socio-legal theory as well as the significance of Professor Cotterrell's oeuvre for it. Following this, a reception for the official launch was held in the foyer of the School of Law. Both were well attended and greatly successful, serving as testament to Professor Cotterrell's illustrious career in the field.

Professor Morag Schiach, Vice Principal and Executive Dean of Humanities and Social Sciences, was in attendance and had this to say of the event:

"I was delighted to join colleagues in the Department of Law for the launch of a Festschrift for Roger Cotterrell (edited by Richard Nobles and David Schiff). Roger has been a generous and distinguished member of our academic community in HSS for many years. The esteem in which Roger is held by his colleagues within the field of Law was clear from the many excellent researchers who participated in a workshop to explore the issues raised within 'Law, Society and Community: Socio-Legal Essays', and the warmth and affection of these colleagues was also clear during the very enjoyable reception that followed this."

For more information or to purchase the book, visit Ashgate publishing.