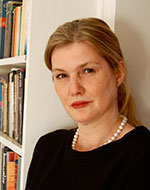 Professor Douglas-Scott joined Queen Mary in September 2015 as Anniversary Chair in Law. Previously she was Professor of European and Human Rights law at the University of Oxford, and before that Professor of Law at King’s College London. She retains a link with Oxford as honorary research fellow at Lady Margaret Hall, Oxford.

Professor Douglas-Scott was born and educated in Edinburgh. She studied philosophy, art history and aesthetics before taking a degree in law. She has a broad range of legal interests but specialises in public law (including comparative constitutional law), human rights and legal and social theory, often looking to context, and to historical and comparative perspectives to inform her work. She has published widely in these fields, including the monograph, Constitutional Law of the European Union, and the co-edited Research Handbook on EU Law and Human Rights. Her work has been widely recognised in the field of constitutional law (see eg - ‘Does Britain need a proper Constitution?’ ‘Duel’ with Adam Tomkins, Prospect magazine, April 2 2019). She is a member of the Advisory boards of the Constitution Society and International Society of Constitutional Law (British Irish Chapter). Sionaidh also writes on matters of the Constitution for the national media and is a frequent contributor to Prospect magazine and Prospect online.

Her work has clear practical dimensions and she has taken an active part in the debates over Brexit, having written numerous articles, and given many talks on this subject. View her Chatham House primer on Brexit. Her work has been cited in the media and in Westminster, Scottish and European Parliament reports and she frequently gives evidence to those bodies. She was twice special legal advisor to the Scottish Parliament (then) European and External Relations committee Inquiry into ‘Brexit and its consequences’ from 2015-2017, providing oral and written briefings to the committee on a regular basis, and is also a member of the Scottish Parliament Panel of Experts regarding the UK's decision to leave the EU.  She was also a member of the UK Expert Working Group on the EU (Withdrawal) Bill and the Rule of Law chaired by Dominic Grieve QC MP.

Sionaidh is also interested in sub-state independence movements in Europe. Her work was widely cited in the context of the Scottish independence referendum in 2014, and also the subject of an online symposium, Will an independent Scotland stay in the EU, hosted jointly by the UK Constitutional law blog and the German Verfassungsblog. She also is a member of the University of Edinburgh's Centre on Constitutional Change and Senior Associate Fellow at the Scottish Centre on European Relations.

Professor Douglas-Scott is also the author of the monograph Law After Modernity, which was nominated for the Socio-Legal Book prize, and explores many issues of pluralism, justice and human rights, at a more abstract and theoretical level than some of her other work, and unusually, for a work of legal theory, is illustrated with various images and artistic works. She is particularly interested in the intersection of images, visual studies and legal scholarship and many of her works have incorporated art and visual images, as well as contextual insights from Art History and the Humanities more generally. View her work on Brexit and images. She is also the co-editor of a much-cited series of essays on religion and law, entitled, Faith in Law.

Sionaidh was awarded a major Leverhulme research fellowship of £172,987 for 3 years from 2018–2021 to work on a project on Brexit and British constitutional unsettlement. This project investigates the impact of Brexit on a Constitution already ‘unsettled’ (per Neil Walker) and under strain, but is also unique in locating Brexit in the broader context of historically significant British ‘acts of union or disunion’ - such as the loss of former US colonies and British Empire, and the place of Scotland and Ireland in the Union. These precedents help us understand how a British constitutional identity has been shaped or dismantled by legal concepts of union or sovereignty.

She has held visiting posts and delivered many lectures at various institutions in Europe and the US, including Georgetown Law School, Columbia University, SMU Texas, and the University of Bonn, where she was visiting Jean Monnet Professor. Since 1993, she has co-taught and developed a course on comparative US and European human rights law with Justice Anthony Kennedy of the US Supreme Court for McGeorge Law School at the Salzburg Forum for International Studies.

From 2015-2018, Sionaidh was co-director (along with Dr Maks del Mar) of the Queen Mary Centre for Law and Society in a Global Context, which is a home for multidisciplinary and interdisciplinary research into the global dimensions of law and society.

In March 2019, Sionaidh’s work was recognised by the award of an honorary doctorate from the University of Utrecht.

In 2013 she published a monograph, Law After Modernity, in the Legal Theory Today series, originally edited by Professor John Gardner. In this work she present a radical, innovatory vision of contemporary law, with a particular focus on transnational law, giving an account that is historical and contextual in nature, and exploring at a more abstract level many of the issues of pluralism, justice and human rights also to be found in my work on EU and public law. Unusually, for a work of legal theory, it is illustrated with various images and artistic works. Law After Modernity was nominated for the Socio-Legal Book Prize 2014.

She has also co-edited a series of essays on religion and law: Faith in Law (discussed for example by Rowan Williams, then Archbishop of Canterbury, in a lecture, reprinted in The Guardian, February 2008).

She is particularly interested in the intersection of images, visual studies and legal scholarship. Many of her recent writings (i.e. ‘Rethinking Justice for the EU’; ‘Pluralism and Justice in the EU’; her contribution to Europe’s Constitutional Mosaic; as well as each chapter of Law After Modernity) have incorporated art and visual images, as well as contextual insights from Art History and the Humanities more generally. As well as writing about this field, in May 2015 she co-organised (with Dr Maks del Mar) a workshop at Oxford University that brought together legal theorists, art historians, visual epistemologists, practising visual artists and others to consider the role(s) that images and imagery play in theorising about law.

She has also contributed book reviews to the philosophical journal Mind, and has been a member of the Society of Legal Scholars jurisprudence panel.

Her work on European law focuses on the constitutional law of the EU, and in particular its human rights regimes, as well as the challenges that legal pluralism and the need for justice present for the Europe, and has published a large amount in this area. Her work is contextual and theoretical, as well as legal in nature.

She has written a leading work in the field, Constitutional Law of the European Union, which was written as a scholarly contribution rather than a student text but was nonetheless adopted on a variety of courses both here and abroad, and was very positively reviewed in the leading European law journals.

She is also currently working on two major publications in European human rights law, and participating in a major research project on citizenship and human rights, funded by the European Commission.

She is also frequently called to give evidence (oral and written) to the UK Parliament on EU human rights and constitutional matters, and most particularly on the constitutional aspects of Brexit.

In the field of Public law she is particularly interested in human rights law, and issues of sovereignty and pluralism and have published many articles in these areas.

She also writes about the growth of sub-state nations and independence movements, and how these challenge our notions of constitutional and international law, and my work has been widely cited, and discussed in the media in the context of the Scottish referendum on independence and the informal Catalan consultation in 2014.

Major Leverhulme research fellowship (£172,987) from 2018–2021. The project concerns Brexit and British Constitution, investigating the impact of Brexit on a Constitution already ‘unsettled’ (Walker) and under strain. But it is also unique in locating Brexit in the broader context of historically significant British ‘acts of union or disunion’ - such as the loss of former US colonies and British Empire, and the place of Scotland and Ireland in the Union. These precedents help us understand how a British constitutional identity has been shaped or dismantled by legal concepts of union or sovereignty.

Also funded by the British Academy and IALS funds for scholarly visits to the European Court of Justice and US Supreme Court, as well as visiting scholar at Georgetown University Law School, in order to carry out comparative human rights research.

Professor Douglas-Scott has published over 150 articles, books, book chapters and shorter pieces. Some of her work may be found on her SSRN page and academia page.

Below is a selection of her more recent work.

Forthcoming as of June 2019

Professor Douglas-Scott welcomes applications in the following areas of research: European legal pluralism; constitutional implications of Scottish independence; the EU Charter of fundamental rights; and law and the image.

A selection of my videos may be found on Google videos, for example: