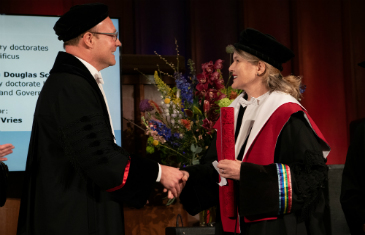 Sionaidh Douglas-Scott, Anniversary Chair in Law at Queen Mary University of London, received an Honorary Doctorate from Utrecht University during its 383rd Anniversary Day on 26 March 2019.

The University conferred the Honorary Degree acknowledging Prof. Douglas-Scott's knowledge and expertise in the fields of human rights, constitutional law, the interactions between national, international and European law, the contexts of law, rights and justice, philosophy and the relationship between law and religion, as well as the high calibre of her research.

In her acceptance speech Prof. Douglas-Scott emphasised the value of the connections between Britain and Europe. "I believe both European and human rights law bridge divides and promote transnational collaborations, so it is a very great honour to receive such a prestigious recognition."