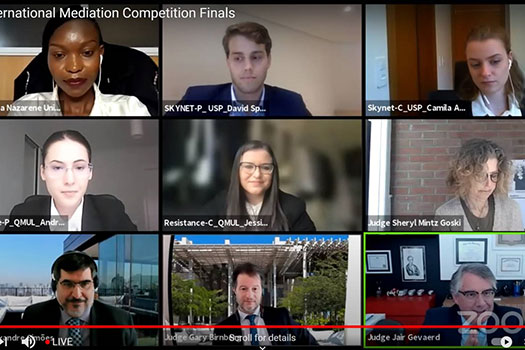 This makes Queen Mary the only participating university progressing from the elimination rounds both as a negotiating team and in the individual mediator category. The fact that this is Queen Mary’s first participation in this competition makes the team’s success even more impressive.

Lilit Nagapetyan, a PhD candidate from Queen Mary’s School of International Arbitration and the team’s coach, said: “I can attest to the great performance by the team in all rounds and the excellent feedback received from the judges, who welcomed Queen Mary’s success. This reflects and further contributes to the University’s long-standing reputation in alternative dispute resolution moots and competitions.”

The CPR International Mediation Competition is an annual competition held in São Paolo, Brazil, that offers students the opportunity to learn and practice their mediation and negotiation skills through role-playing and engagement with a realistic mediation problem drafted by experienced mediators and practitioners.

The team is formed of current and former winners of the BCLP (Bryan Cave Leighton Paisner) x QMUL Annual Commercial Negotiation Competition, who were selected to participate by the Queen Mary Alternative Dispute Resolution Society. Lilit Nagapetyan has closely supported the participants of the BCLP x QMUL Annual Commercial Negotiation Competition by acting as judge since its first edition.