Dr Daniele D’Alvia, who completed his LLM in Commercial and Corporate Law in 2013, updates us on his career since graduating from Queen Mary University of London. 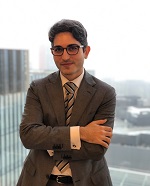 I am a teaching associate in Queen Mary and also a module convener in comparative law at Birkbeck College, as well as a visiting lecturer at the International Chamber of Commerce (Rome office) in Islamic finance.

Furthermore, in October 2019 I was appointed as an associate research fellow at the Institute of Advanced Legal Studies where I am leading a research project on Special Purpose Acquisition Companies. That was also the topic of my PhD, which I completed at Birkbeck in June 2019.

You can read about Daniele’s research and publications on his IALS page.