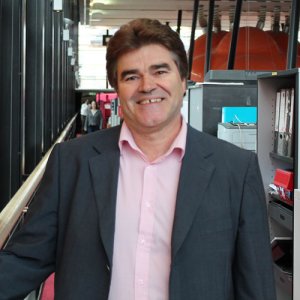 Chris Thiemermann is Professor of Pharmacology and Centre Lead for Translational Medicine & Therapeutics at the William Harvey Research Institute (WHRI).

Thiemermann is an internationally recognised expert in pathophysiology and experimental therapy of shock and ischaemia-reperfusion injury with expertise in target discovery and evaluation of the efficacy of drugs in small animal models. Recent translational successes include a phase II RCTs evaluating the effects of pentoxiphylline in patients with chronic kidney disease (on dialysis) and the repurposing of the antimalarial drug artesunate for patients with severe haemorrhage and organ failure. His research was recognised the Sandoz Prize (British Pharmacological Society 1994), Young Investigator Award of the Surgical Infection Society Europe (1999), the Menarini-Award for CV Research (2001) and the Albert Nelson Marquis Lifetime Achievement Award (2018). He has published more than 430 scientific articles in peer-reviewed scientific journals, which have been cited more than 31,000-times (h-index: 92; i10-index: 356). According to Google Scholar, he is one of the 10 most cited researchers in in the word working on sepsis or trauma, and one of the 40 most-cited pharmacologists.

He is an active educator and many of his past PhD-students and post-doctoral fellows have gone on to develop their own successful careers in medicine, science or commerce. Together with Prof Mauro Perretti, he has developed and leads the Module ‘Business in Pharmacology’, which is part of the BSc degree in Pharmacology and Innovative Therapeutics offered by QMUL and offers students an insight into the world of drug discovery and development as well as the world of regulatory affairs.

Over the years, Thiemermann’s research has been generously supported by the British Heart Foundation (Senior Fellow from 1996 to 2001), The Wellcome Trust, British Pharmacological Society, the European Union, the Medical Research Council, Kidney Research UK and William Harvey Research Foundation, Barts and the London Charity (BLC), BBSRC and the National Institute for Health Research (NIHR).

He is currently Deputy Director of the Centre for Diabetic Kidney Disease and a co-PI in the Centre for Trauma Sciences at the Royal London Hospital. He is a Fellow of the Academy of Medical Sciences of the United Kingdom, a Fellow of the British Pharmacological Society, a Foreign Member of the Academy of Sciences of Portugal (Lisboa), a Chair of the Post-Doctoral Fellowships Committee of the NIHR, Past-President of the European Shock Society (presidency 2008-2011), Member of the Executive Council of the World Federation of Shock Societies, Associate Editor of the Journal Frontiers in Immunology. He is also the Chief Executive Officer (since 2003) of William Harvey Research Limited, a not-for-profit company that organises scientific conferences, contract research and clinical fellowships and works closely with its parent charity, The William Harvey Research Foundation.

The Thiemermann lab has a long-standing research interest in the pathophysiology and therapy (preclinical and clinical) of (i) ischaemia-reperfusion of the heart (acute myocardial infarction, non-STEMI) and kidney (acute kidney injury, chronic kidney disease, renal fibrosis), and (ii) shock of various aetiologies (septic shock, trauma-haemorrhage) and the associated systemic inflammation and multiple organ dysfunction syndrome. Over the years, the lab has identified several, new drug-able targets including inducible nitric oxide synthase (iNOS), poly (ADP-ribose) polymerase (PARP), peroxisome-proliferator activated receptors (PPARs) and Bruton tyrosine kinase (BTK), to name but a few. We have also developed and evaluated the efficacy of numerous, novel interventions for shock and ischaemia-reperfusion injury (including iNOS-inhibitors, PARP-inhibitors, radical scavengers, PPAR-ligands, erythropoietin and BTK-inhibitors).

Recent translational successes include phase II placebo-controlled randomised clinical trials (RCT) aimed at (a) evaluating the effects of pentoxiphylline in patients with chronic kidney disease on dialysis (together with Prof Magdi Yaqoob, Centre for Diabetic Kidney Disease) and (b) the repurposing of the antimalarial drug artesunate for patients with severe haemorrhage and organ failure (together with Prof Karim Brohi, Centre for Trauma Sciences). A phase IIa RCT evaluating the effects of artesunate in patients 105 with severe blood loss caused by trauma (code red) is jointly funded by the Welcome Trust and the Department of Health is currently ongoing.