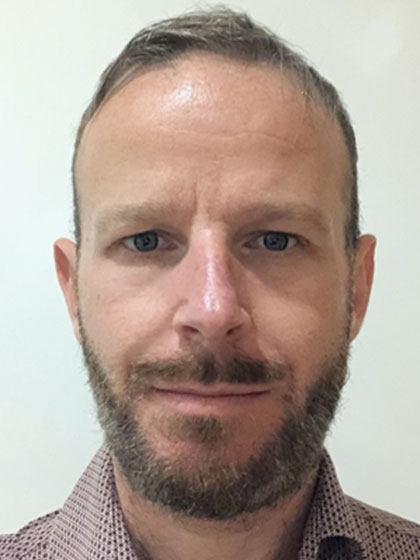 I obtained my degree at the University of Florence, Italy, in 1999 (BSc Biological sciences, MS in Pathophysiology). I was then awarded an Accademia Nazionale dei Lincei and a Telethon Fellowship from the University of Florence, Milano-Bicocca and Tulsa, (USA) to study the role of Ether-a’-go-go-Related Gene (ERG) in cancer progression, neural function and hormone secretion. I then undertook a PhD in Clinical and Experimental Oncology at the University of Florence, and spent half of the time at the University of Tulsa (USA) as a Fulbright Distinguished Fellow. My PhD studies uncovered a novel mechanism of post-translational regulation of ERG channels expression controlling ERG current density, neurite outgrowth and apoptosis. In 2006 I relocated to Queen Mary University of London, first at the school of Biological and Chemical Sciences and then at the William Harvey Research Institute’s Centre for Endocrinology, studying signalling pathways regulating adrenal cortex development and function. After a year at the UCL Institute of Child Health, I became a lecturer in Endocrinology in 2012, a Senior Lecturer in 2015 and a Reader in 2019.

Current members of the Group

Reprogramming strategies aimed at obtaining steroidogenic-like cells
The adrenal cortex is the primary site of steroid synthesis and controls essential metabolic processes. The ability to generate an individual-specific cell platform through the generation of human induced pluripotent stem cells or lineage conversion (transdifferentiation) offers a new paradigm for functional studies, for modelling human disease and for drug testing. There is an unmet need for developing such technology in the adrenal field, as current in vitro systems are not physiologically relevant and some animal models do not phenocopy the adrenal disease. With this in mind, we have been able to generate human inducible steroidogenic cells (hiSCs) starting from skin fibroblasts, blood and urine-derived cells (Fig 1). hiSCs expressed steroidogenic enzymes, secrete corticol in a ACTH-dependent fashion and are viable when transplanted intra-adrenally or under the kidney capsule. hiSCs derived from patients with congenital adrenal hyperplasia showed an altered steroid profile, which was rescued by expressing the wild-type form of the enzyme.

We are currently working on alternative reprogramming strategies to generate adrenocortical-like cells and testing them on in vivo models of adrenal insufficiency. 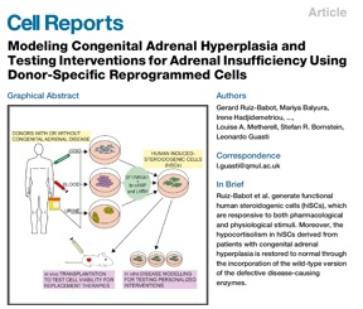 Molecular mechanisms in adrenocortical carcinogenesis
The adrenal cortex undergoes continuous self-renewal throughout life. The histologically and functionally distinct zona glomerulosa and zona fasciculata are replenished from a pool of undifferentiated capsular and subcapsular cells. Capsular cells expressing the transcription factor Gli1 are one source of steroidogenic cells. The differentiation of Gli1+ cells into fully mature steroidogenic cells is initiated through a distinct population of undifferentiated cells located underneath the capsule and secreting the cell-fate regulator sonic hedgehog (Shh). Corrupting the differentiation of these cells as part of adrenal self-renewal is a plausible contributor to the pathogenesis of adrenocortical carcinoma (ACC). Activation of WNT/bCatenin, another pathway active at the capsule/subcapsular boundary involved in adrenocortical growth, self-renewal and zonation, is a frequently observed molecular change in ACC. In addition to Gli1+ and Shh+ cells, another marker of undifferentiated cells recognised in rats is delta-like homologue 1 (DLK1). This is a paternally expressed, cleavable single-pass transmembrane protein, which is a member of the Notch/Delta/Serrate family. DLK1 expression is seen in many human tissues during embryonic development but in adults, expression is low in most healthy tissues. It is known to inhibit differentiation and expression is reported in numerous malignancies.

The role of DLK1 and its interacting partners in the pathogenesis of ACC is being investigated through the use of mouse genetic lineage tracing, in vitro and ex vivo assays. 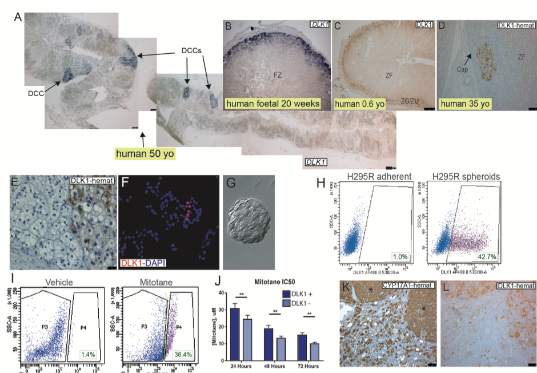