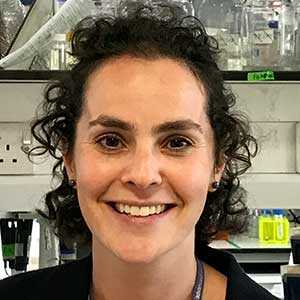 Dr Sasha Howard graduated in Medicine from the University of Cambridge (preclinical medicine, 1st class honors) and University College London (MBBS, distinction) in 2004. She trained in Paediatrics before sub-specialising in Paediatric Endocrinology at Barts Health, UCLH and Great Ormond Street Hospitals. She completed a PhD in Molecular Endocrinology at the William Harvey Research Institute, Barts and the London School of Medicine funded by a Wellcome Trust Research Training Fellowship and a Barts Charity Clinical Training Fellowship. She was awarded the 2015 Henning Andersen prize for Paediatric Endocrinology (ESPE) and 2016 1st Oral Plenary Prize at the Academy of Medical Sciences Spring Meeting for Clinician Scientists. In 2017 she won a 4-year NIHR clinical lectureship alongside an Academy of Medical Sciences starter grant to continue her research into disorders of human pubertal timing. She was awarded a Wellcome Trust Clinical Research Career Development Fellowship, stage 1 in 2021 and appointed Senior Lecturer at Queen Mary University of London and Honorary Consultant in Paediatric Endocrinology at Barts Health NHS Trust (Sept 2021). Dr Howard is member of the NIHR / BSPED Clinical Studies Group (CSG) and Co-PI of the Barts Pituitary Centre.

Find out more about Endocrinology at the William Harvey Research Institute.

Dr Howard’s research is focused on optimising the diagnosis and management of patients with pubertal disorders.

While we know that these conditions are often inherited in families, we still understand very little about how they occur, and which gene changes are responsible. Currently, it can be difficult to distinguish which patients with early or late puberty need intensive treatment and follow up.

Genetics of Disordered Puberty Project (CPMS ID 30730, PI Dr Sasha Howard): our aim is to identify genetic mutations that cause Central Precocious Puberty (CPP) and Delayed Puberty (DP). To achieve this, we utilise various genetic testing methods to diagnose patients that have been referred to us. So far, our cohort of referrals stands at >130 patients in whom we have found a genetic diagnosis in 28%.

If you have a patient with suspected CPP or DP please get in contact and we will endeavour to provide you with a genetic diagnosis completely free of charge.

Important: We are a purely research-based group and therefore all genetic diagnoses may have to be validated by a NHS or nationally accredited facility.

Genetics of the timing of puberty 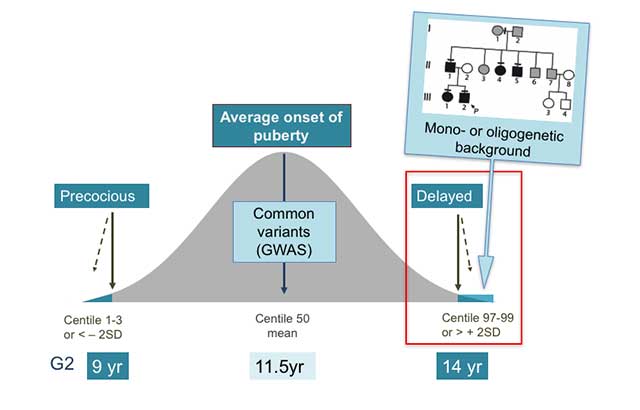 Figure 1. Genetics of the timing of puberty.  The precise genetic causes of the extreme tails of normal puberty are unclear, as is the basis of association of specific gene variants with pubertal timing in the general population (outside of families with GnRH deficiency or self-limited delayed puberty). Understanding the role(s) of gene variants influencing the timing of puberty, both precocious and delayed, is expected to contribute to the understanding of the biological control of human pubertal timing both in disease and in the general population. This knowledge could directly help patients through improved diagnostic ease and facilitate identification of gene-environmental interactions. Based on the observed inheritance pattern, we hypothesize that families with inherited self-limited delay in growth and puberty are enriched for genetic variants that have high-impact on pubertal timing and, that these variants are amenable to discovery using modern molecular genetic tools. Recently, we have discovered evidence that such high impact variants may influence the timing of puberty, significantly delaying the onset of puberty in a subset of families. 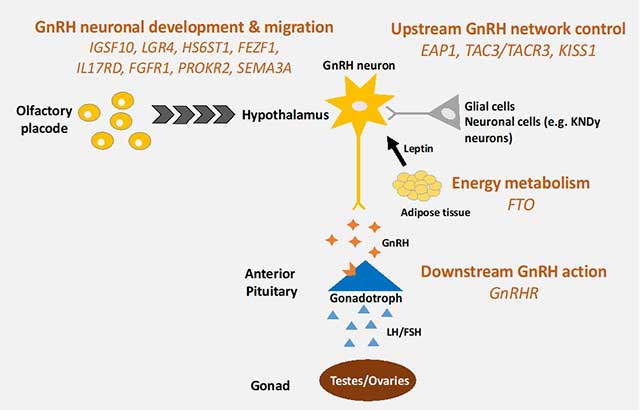 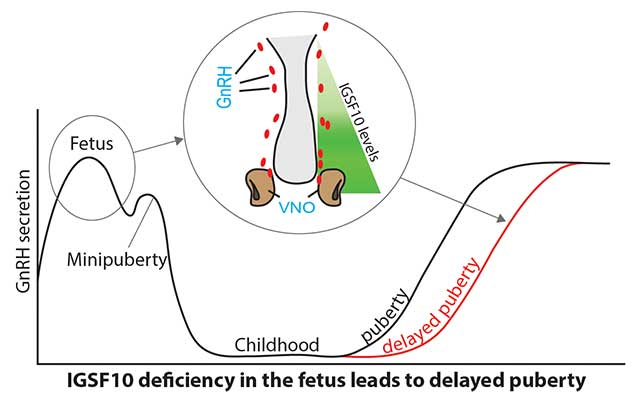 Figure 3. Working model of how mutations in genes such as IGSF10 led to delayed puberty. Reduced IGSF10 expression during embryogenesis in the corridor of nasal mesenchyme cells of the vomeronasal organ (VNO) leading to the olfactory bulbs delays the migration of gonadotropin-releasing hormone (GnRH) neurons to the hypothalamus. This reduction manifests in adolescence as a phenotype of delayed puberty due to abnormalities of GnRH neuronal network function.