Professor Leo Dunkel graduated in Medicine in 1981 at the University of Helsinki, Finland and completed his residency in Paediatrics and Paediatric Endocrinology at the Hospital for Children and Adolescents, University of Helsinki. After his residency, he undertook postdoctoral training in the Division of Reproductive Biology at Stanford University. He worked at the University of Kuopio, Finland, as Chair of Paediatrics in the Department of Clinical Medicine, before moving to the Centre for Endocrinology at the William Harvey Research Institute in 2011.

Professor Dunkel was the Founding member and first Chairman of the Finnish Society for Paediatric Endocrinology (1999) and has been an active member of the European Society for Paediatric Endocrinology (Member from 1988), including as a Council Member (2000-2004) and Program Organising Committee Member (2007-2012). Professor Dunkel has also served on the Committee for Scientific Education, Faculty of Medicine, University of Helsinki (1998-2001) and University of Kuopio (2004-2011) and on the Editorial Boards of several scientific journals. He currently serves on the Editorial Board of the Journal of Clinical Endocrinology and Metabolism.

Paediatric Endocrinology Research Group
Professor Dunkel has a long-standing interest in the area of growth and puberty. In the past 10 years, he has focused on the regulation of linear growth. These studies have culminated in a conceptually new paradigm: inhibiting the biological action of oestrogen could provide an efficacious therapy for treating various growth disorders. Indeed, the growth promoting potential of a third-generation aromatase inhibitor is currently being investigated in two placebo-controlled clinical trials.

Professor Dunkel is also using genetic tools to establish the causes of X in his well-characterized cohort So far, these studies have established that a previously uncharacterised gene (IGSF10) promotes the growth and differentiation of gonadotropin-releasing hormone (GnRH) neurons, an important discovery because it implicates involvement of a previously unsuspected biological pathway in the control of pubertal timing.  He has also accrued good evidence that ISGF10 variants may underlie some cases of hypogonadotrophic hypogonadism (HH), where patients have complete pubertal failure due to GnRH deficiency.

A major focus of Professor Dunkel’s current work is the development of novel cell models to interrogate the genetic factors underlying the timing of sexual maturation through the GnRH neuronal network (see Figures 1 through 3). To this end, his group has generated induced pluripotent stem cell (iPSC) lines to enable study of neuronal growth and GnRH-neuron differentiation in patients with disorders of sexual maturation: self-limited delayed puberty, Kallmann Syndrome (KS) and HH. This platform promises to act as a basis for delineating the processes of neuronal maturation, for example, by genetically manipulating candidate gene expression in patient-generated iPSC lines. It also provides an excellent resource to study the functional effects of variants found in his exome sequencing studies of patients with self-limited delayed puberty.

Genetics of the timing of puberty 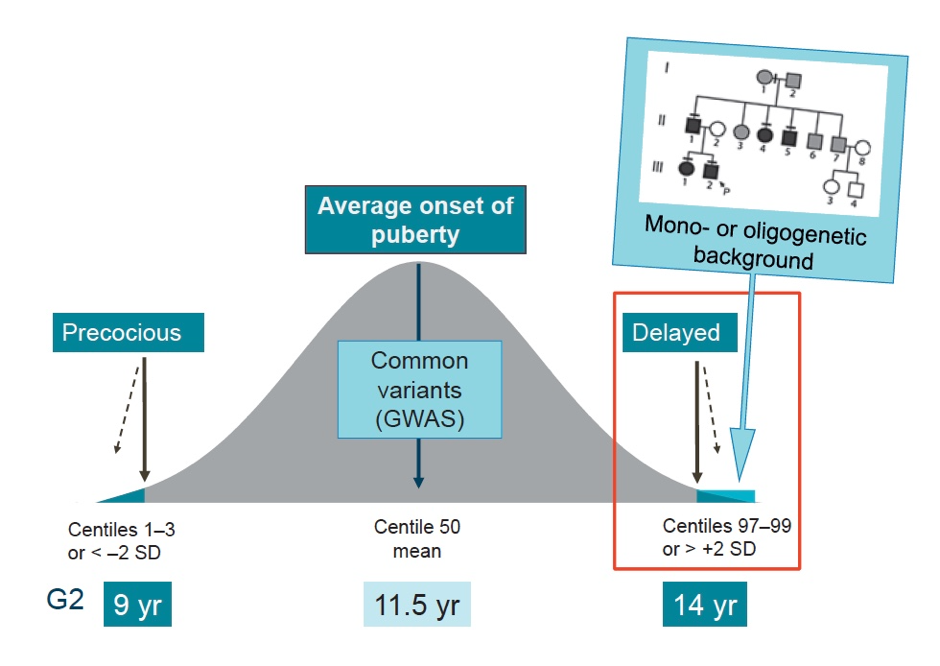 Figure 1. Genetics of the timing of puberty.  The precise genetic causes of the extreme tails of normal puberty are unclear, as is the basis of association of specific gene variants with pubertal timing in the general population (outside of families with GnRH deficiency or self-limited delayed puberty). Understanding the role(s) of gene variants influencing the timing of puberty, both precocious and delayed, is expected to contribute to the understanding of the biological control of human pubertal timing both in disease and in the general population. This knowledge could directly help patients through improved diagnostic ease and facilitate identification of gene-environmental interactions. Based on the observed inheritance pattern, we hypothesize that families with inherited constitutional delay in growth and puberty are enriched for genetic variants that have high-impact on pubertal timing and, that these variants are amenable to discovery using modern molecular genetic tools. Recently, we have discovered evidence that such high impact variants may influence the timing of puberty, significantly delaying the onset of puberty in a subset of families. 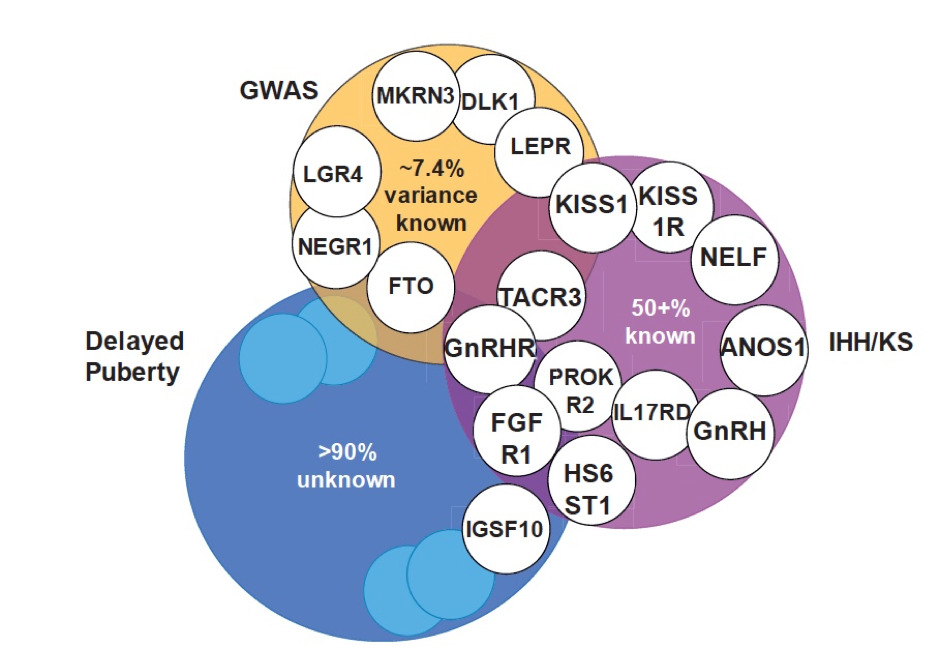 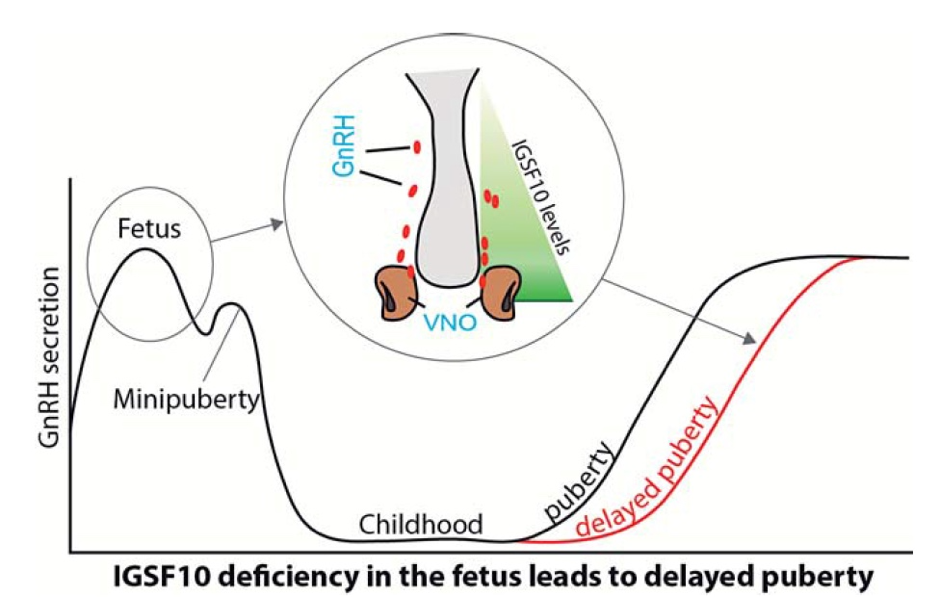 Figure 3. Working model of how IGSF10 mutations delay puberty. Reduced IGSF10 expression during embryogenesis in the corridor of nasal mesenchyme cells of the vomeronasal organ (VNO) leading to the olfactory bulbs delays the migration of gonadotropin-releasing hormone (GnRH) neurons to the hypothalamus. This reduction manifests in adolescence as a phenotype of delayed puberty due to abnormalities of the GnRH neuronal network.