Lou Metherell obtained a BSc in Biology from the University of Manchester BSc in 1985. During her undergraduate studies she developed an interest in genetics which led her to undertake a postgraduate diploma in Human Genetics at the University of Aberdeen. After a brief period in industry she returned to science and was awarded her PhD from the University of Greenwich in 1999. She joined the Centre for Endocrinology at WHRI in 1998, where her research has focused on the genetics of endocrine disease, particularly disorders of adrenal insufficiency. In 2008, she was awarded a New Investigator Research Grant from the Medical Research Council. She was appointed Reader in 2012 and Professor of Endocrine Genetics in 2017.

Through linkage mapping and next-generation sequencing of our cohort of FGD patients, our group has established that diseases of ACTH-resistance are genetically heterogeneous, involving mutations in a diverse range of genes that promote adrenocortical development and glucocorticoid production (see cartoons). Our most recent advances in understanding the pathogenesis of these life-threatening conditions include: 1) identifying syndromic forms of primary adrenal insufficiency caused by mutations in a) MCM4, encoding a component of the DNA replication machinery and b) SGPL1, encoding a degradative enzyme of sphingolipid metabolism; 2) demonstrating that partial loss-of-function mutations in STAR and CYP11A1 cause attenuated disease and 3) establishing that mutations in four redox genes (e.g. NNT, TXNRD2, PRDX3, GPX1) produce a glucocorticoid deficiency phenotype indistinguishable from that resulting from ACTH-resistance receptor pathway defects, for example, loss of MC2R and MRAP activity. 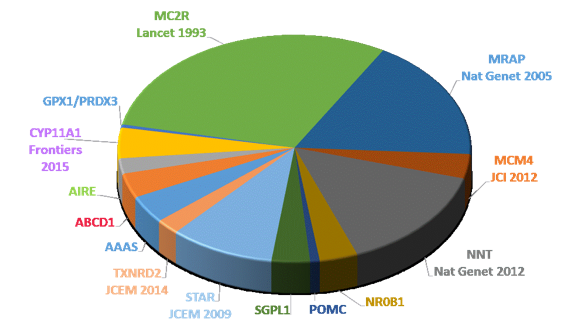 The Centre for Endocrinology has a long history in researching growth disorders and now acts as an international diagnostic sequencing service for GHI cases, led by Helen Storr. Together we have uncovered causal mutations in many components of the GH-IGF1 signalling pathway, including a novel mechanism of pseudoexon activation in a case of atypical GHI.