Details about the London Arts and Humanities Partnership (LAPH2) competition, offering up to 90 AHRC-funded studentships can be found here

Research in German covers the whole gamut of German Studies from the Middle Ages to the Present day, including language teaching, linguistics and literature, film, thought, theory, media and culture from Austria, Switzerland and the former GDR as well as the Federal Republic.

A particular area of expertise is Anglo-German Cultural Relations, including the history of German Studies in the United Kingdom.

Several members of the department also do interdisciplinary work in fields such as the history of thought, translation and translation theory, medieval studies and gender and queer studies.

Rüdiger Görner - Director of the Centre for Anglo-German Cultural Relations

The main research income for the CAGCR currently comes from the BASF - supporting MA bursaries and the ANGERMION annual Lecture. 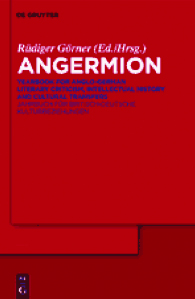 Previous sponsors include Bosch UK and the Claussen Simon Foundation (Hamburg) via the Stifterverband deutsche Wissenschaft as well as the British-German Club in Hamburg and the British Chamber of Commerce in Düsseldorf.

We currently have a AHRC Collaborative Doctoral Award with the V&A awarded to Jana Riedel.

Two research students work on the aesthetics of Friedrich Nietzsche and one on the literary phenomenology of objects.

One student received a QMUL research scholarship and one research student is supported by the Studienstiftung des Deutschen Volkes.