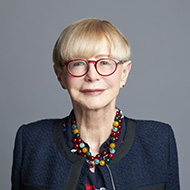 Professor Malgosia Fitzmaurice holds a chair of public international law at the Department of Law, Queen Mary University of London. Since 2019 she has been elected  an Associate Member of the Institue de Droit International and in 2021 she was awarded the Doctorate Honoris Causa of the University of Neuchâtel. She specialises in international environmental law; the law of treaties; and indigenous peoples. She publishes widely on these subjects. Download Professor Fitzmaurice's CV [PDF 398KB] for a full list of publications.

In 2020, Professor Fitzmaurice has published (with Professor Panos Merkouris) a book Treaties in Motion: The Evolution of Treaties from Formation to Termination (Cambridge University Press, 2020). The law of treaties is in constant motion, understood not only as locomotion, but also as motion through time and as change. Thus, kinesis and stasis, two sides of the same concept of 'motion', are the central themes of Treaties in Motion. The concept of motion adopted in this book is based on the philosophy of Aristotle. He identified six types of motion: creation (genesis), increase (auxesis), diminution (meiosis), alteration (alloiosis), destruction (phthora), and change of place (kata topon metabole), which has been amended by the authors to change in space-time (kata topon kai chronon metavole) to reflect our modern scientific understanding of time as a dimension through which motion and change occurs. Each chapter's analysis proceeds by focusing on a specific area of a treaty's 'life-cycle', where each type of motion shines through and is described through three different frames of reference: treaties, the Vienna Convention of the Law of Treaties, and customary law.

Her publications also include a monograph Whaling and International Law, Cambridge University Press, 2015 and (co-edited with Dai Tamada) Whaling in Antarctic: Significance and Implications of the ICJ Judgment, Brill/ Nijhoff, 2016.

She has delivered a lecture on the International Protection of the Environment at the The Hague Academy of International Law. Professor Fitzmaurice was invited as a Visiting Professor to and lectured at various universities, such Berkeley Law School; University of Kobe; Panthéon-Sorbonne (Paris I). During 2013-2015, she was involved (with Professor Valsamis Mitsilegas) in a multi stakeholder project funded by the EU Commission on environmental crime. Professor Fitzmaurice teaches undergraduate and LLM modules in international environmental law and the law of treaties. She also supervises PhD students.

She is Editor in Chief of International Community Law Review journal and of the book series published by Brill/Nijhoff Queen Mary Studies in International Law.

She has also advised on the law of treaties and served as an expert in her areas of expertise.

Professor Fitzmaurice welcomes proposals for postgraduate supervision in the fields of international environmental law and the law of treaties.