Read more about the project below. Send an email to the coordinator, Dave Horne (d.j.horne@qmul.ac.uk), introducing yourself briefly and stating that you are interested in joining OMEGA-LOCATE. If you have any questions, please ask them!

Requirements
CS collaborators will need to have internet access and a computer with Google Earth installed. Local / regional knowledge will be an asset but is not essential. You do not need specialist knowledge of ostracods, but an interest in a relevant field such as freshwater biology, ecology or palaeontology would be helpful. You can be based anywhere in the world.

Methods
Citizen Scientist collaborators will choose and request a geographical region from those listed below. If their request is approved by the project coordinator, they will be emailed an Excel spreadsheet containing coordinate and place name data for 50–100 localities, a KML (Keyhole Markup Language) file of the data which can be added to Google Earth, and a pdf manual containing instructions (also below), as well as information about OMEGA and its applications.

Workshops
Collaborating Citizen Scientists will be offered the opportunity to attend a two-day workshop at Queen Mary University of London in order to learn more about the context of the project and about ostracods in general as well as their use in palaeoenvironmental and palaeoclimatic reconstruction, aided by practical microscopy and Geographical Information System exercises relevant to the project. Workshops are not intended to provide initial training, but to reward those already contributing to the project; for those attending, we will reimburse a proportion of reasonable travel and accommodation expenses. The first workshop is planned for the last week of June 2013. Clearly, in the first year of the project at least, these workshops will primarily be of benefit to UK-based participants, but we will review demand and consider offering additional workshops, for example in another European country and/or in the USA, in subsequent years.

The method for checking, correcting and validating records is simple: you just drop the KML file into Google Earth
and compare where each record is displayed with where it says it is from in the spreadsheet. If, for example, a record is stated to be from Windermere Lake, but displays in the town of Windermere some distance from the lake, then obviously it needs to be corrected; records that display in the correct location can be validated. Notes can be added to the spreadsheet, which is then returned to the coordinator who will consider all suggestions and make appropriate alterations to the database. The Citizen Scientist can then request another set of data for checking, and so on. 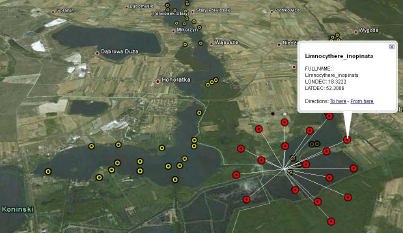 Example of ostracod records displayed in Google Earth; placing the pointer on a marker displays multiple species records from that site.

Geographical regions
At the moment our priority is Europe (in a very broad geographical sense), but we will also be dealing with regions of Canada and the USA in the near future. See the European list below; it is intended as an approximate guide only; if there is a particular smaller region that you are familiar with or more interested in, you can request it (e.g. English Lake District, German Alps, environs of Paris). If a region you are looking for is not in the list, it may be because we have no records from there, or because we have simply forgotten it - please ask. 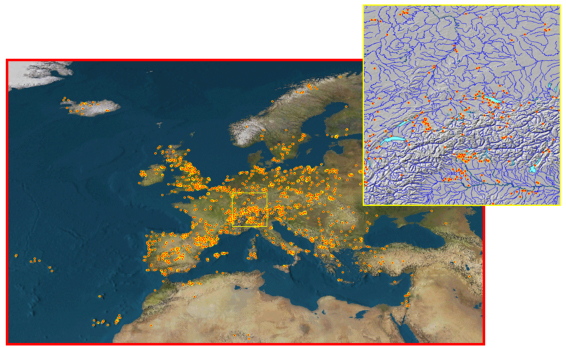