‘The Child in the World’ AHRC Collaborative Doctoral Awards 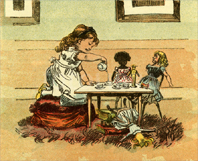 This project examines the ways in which middle- and upper-class children living in Britain between c.1870-1950, engaged with the imperial world in their family settings. Whereas children’s association with empire has been studied through the formal settings of school and youth organisations, this thesis considers children’s everyday lives in the home, through their play, leisure activities and material culture, and through their family networks. The research questions are:

The research uses multiple archival sources but it is underpinned by a focus on objects from the period preserved in the collection of the V&A Museum of Childhood. It is thus intended to demonstrate how museum collections can present ‘a unique and intriguing opportunity for examining objects related to childhood and children’ (Brookshaw, 2009), and to further explore the role of non-textual materials and everyday activities in the making of children’s imperial cultures (Norcia, 2004). 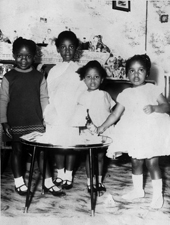 The research focuses on migration of children in relation to the East End of London (local boroughs of Hackney, Newham and Tower Hamlets) between the years 1930 – 2000. Experiences of migration and settlement will be explored in light of such factors as when and at what age children arrived in the UK; the reason for migration; who they came with if accompanied; their place of origin; gender; socio economic status and education. The research will also examine how factors such as the specific neighbourhood where they have settled; the network of support available; the friendships they have developed and the nature and extent of the relationship with the country or countries of origin have affected their transition and settlement.

The research will identify the extent of childhood agency in relation to migration and settlement; the strategies children have used to adapt to the new environment; the social and cultural practices of the East End or the UK that have influenced their lives; what they have retained from the country or countries of origin and their families and how this has changed over time. It will also examine the significance of both individual and collective memory, the use of material culture and technology in relation to notions of identity and belonging including in relation to the East End.

The East End is known as a historic place of settlement for people migrating to the UK. On the one hand it is perceived as a place that welcomes incomers, an area with a strong working class identity where people unite to improve working conditions and uphold civil rights. On the other hand, at specific moments in time and in specific localities, people have been treated as the ‘outsider’, threatened or worse on the basis of perceived ethnicity, country of origin and religion amongst other factors. The nature of the East End is also changing with some areas becoming more gentrified and particularly those areas adjacent to the City of London. There are more artists in the East End than anywhere else in Europe and the long-term impact of the Olympic Games 2012 is not as yet clear. All this means that the East End is both rich and complex in its diversity and in a state of flux with people both arriving and leaving the area. There are pockets of poverty and discrimination alongside wealth and privilege, examples of interracial and neighbourhood conflict alongside social cohesion and creativity. Few people in the East End are unaffected by migration either having migrated either to or from the UK themselves or with one or more ancestors who were previously migrants.  Families who have lived in the area for generations work, study, live and marry with others who have either recently migrated to the UK themselves or who are descended from migrants.  The highest percentage of people in the UK of Black, Asian and Minority Ethnic origin are of mixed parentage and it is unlikely that the East End is an exception to this.

How this impacts on the child who arrives in or leaves the East End and indeed on their subsequent children and grandchildren is both complex and wide ranging.  The following questions are an initial attempt to focus the area of enquiry whilst at the same time acknowledging the wider picture of all East Enders being affected by migration i.e. white or black, first, third or fifth generation, living on run-down estates or in a newly gentrified areas thus adopting a more inclusive approach which highlights connections as well as differences.

Notions of ‘global citizenship’ are increasingly important in schools (QCDA, 2005). These ideas connect geography and citizenship to locate children in the contemporary world in terms of their rights and responsibilities in relation to global issues such as sustainable development, social justice, cultural difference, interdependence, conflict and human rights (Anderson et al, 2008). However, it is through the ongoing interaction between formal education and the spaces of everyday life that children learn about the world, understand their place within it, and develop a sense of ethics towards other people in other places. For children in contemporary London ‘global citizenship’ is as much a matter of negotiating the complex processes of living in a multicultural city made through its complex connections with other places (Massey, 2007), as it is of work in the classroom. Directing the research programme towards the present and the future, and working closely with the Learning and Community team at MoC this project asks two key questions: