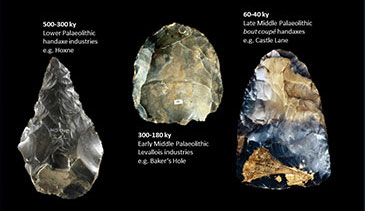 Britain has a rich and well-documented earlier Palaeolithic record, which provides a unique resource to investigate population dynamics and the relationship with north-west Europe during the Middle Pleistocene. The Mapping Palaeolithic Britain Project was a three-year project (2013-2017) funded by a Leverhulme Trust Research Project Grant based at the British Museum. The project examined the changing nature of the early Palaeolithic human occupation of Britain by integrating new electronic datasets of sites and their artefact assemblages through a Geographic Information System (GIS).

Aims of the project

The project addressed a number of key questions: 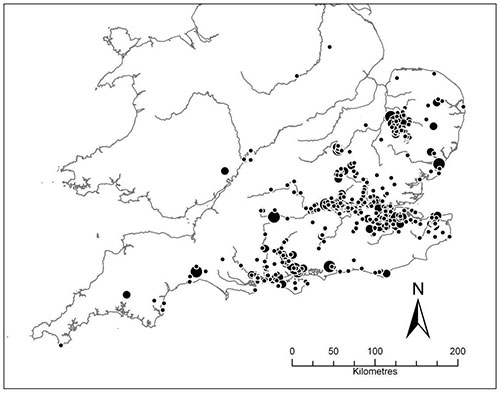 What were the biases in collection history and how has this affected the Palaeolithic record?

The Palaeolithic record inevitably reflects the distribution and survival of Pleistocene sediments but it is also shaped by access to these deposits and by the recovery habits of collectors and by subsequent curation. Many extant Palaeolithic collections were discovered through quarrying, urbanisation and infrastructure projects such as canal, road and railway construction during the later part of the nineteenth century and the earlier part of the twentieth century. There is a large variation in the recovery habits of many of the early collectors: assiduous amateurs such as Worthington George Smith (see below) recovered everything including flakes, while other collectors focused on only the most attractive handaxes. Often artefacts were purchased from workmen with handaxes attracting higher prices, creating a bias towards these artefacts. 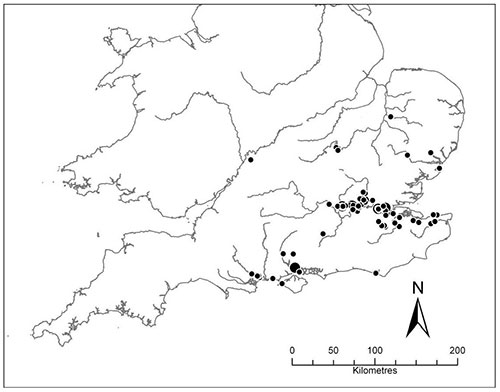 Do spatial patterns reflect changing route-ways into and across Britain?

Access to Britain has depended on its island/peninsula history, which is a function of cyclical changes in climate and sea level and also major landscape changes wrought by glaciation and fluvial erosion. Potential routes into the hinterland could have been from the Netherlands, Belgium and northern France into the valleys of the Thames, Bytham and Great Ouse, or from western or south-western France into the Solent system. It seems likely that these river valleys would have provided natural route-ways through the landscape, not only being a focus of resources, but during warmer periods also acting as open corridors for the otherwise densely-forested interfluves.

Do changes in distribution through time reflect differences in landscape use?

The majority of the British Lower and Middle Palaeolithic record has been recovered from fluvial sediments and usually in secondary context. As such the artefacts probably represent a range of locations along the river valley and its margins. However a smaller, but significant number of sites have been recovered from interfluves, caves and from coastal locations. More detailed examination of the distribution of sites within the landscape is critical to understanding how different populations operated at different times. The distributions are likely to have been influenced by two inter-related factors: first the distribution of resources within the landscape, in particular game and other food resources; and second the density of forest cover beyond the river valleys. 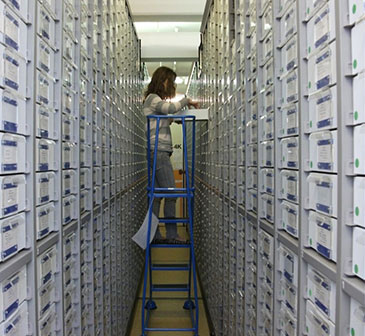 Worthington George Smith (1835-1917) played an important role in the formative period of British Palaeolithic Archaeology. He meticulously recorded and published some of the most important Palaeolithic sites found in Britain and left behind well-documented collections of artefacts. The WGS Manuscript Collection contains Worthington Smith’s list of the artefacts in his collection, along with details about the circumstances of their discovery and whether he later gave them away to fellow collectors or museums. The list provides invaluable contextual information that can help us to understand the spatial distribution of Lower and Middle Palaeolithic sites across Britain. The list was transcribed as part of the Mapping Project using the Crowdsourcing platform MicroPasts.