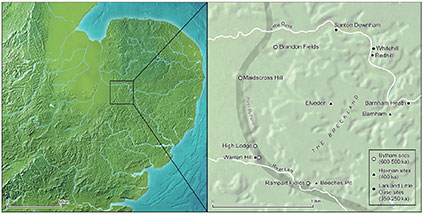 Palaeolithic sites in the Breckland of East Anglia

The Breckland Palaeolithic Project is a three year project funded by a Leverhulme Trust Research Project Grant. Commencing May 2016, the project aims to use the rich geological, archaeological and environmental record of East Anglia’s Breckland to address questions of the environmental and cultural context of Britain’s earliest occupants; the links between technology, culture and human evolution during the Hoxnian interglacial; and the distinctiveness of regional signatures after 400,000 years ago. 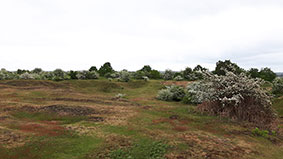 The Breckland contains an unparalleled geological sequence spanning a million years of prehistoric time. This sequence and the area’s Palaeolithic sites divide into three chronological periods:

1. The Bytham River sites. The earliest known archaeological sites in the region are associated with sands and gravels of the two youngest river terraces of the extinct Bytham River. The Bytham was a major west to east flowing river that drained the Midlands and East Anglia until it was destroyed by an ice sheet during the Anglian Glaciation approximately 450,000 years ago. The archaeology of the Bytham sites consists of stone tools such as handaxes and scrapers and represents human occupation of the region from approximately 600,000 years ago.

2. Hoxnian Interglacial sites. The retreat of the Anglian ice sheets left a landscape of lakes, ponds and new rivers. Sediments that infill the lake basins date to the following warm period, the Hoxnian Interglacial, about 400,000 years ago, and contain a rich record of fauna and flora with evidence of human occupation around their shores.

3. Modern river sites. The rivers that constitute the modern drainage network such as the Lark and Little Ouse were established after the retreat of the Anglian ice sheets. Through time they have deposited sediments that form a series of river terraces. The terraces contain stone tools that chart changes in technology from 400,000 to 40,000 years ago. 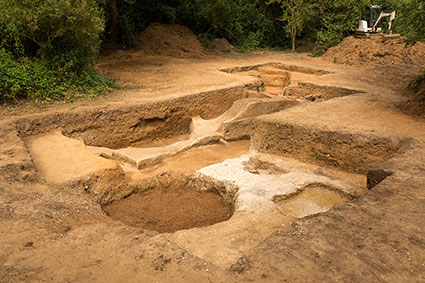 Aims of the project
The project will utilise the Breckland’s important geological sequence and rich archaeological and environmental records to investigate the relationships between people, culture and technology within a developing landscape. There are three key objectives:

1. To establish the regional pattern of Britain’s first occupants. The first human populations in Britain appear to have relied on coastal locations and resources at sites such as Happisburgh and Pakefield from over 800,000 years ago. The Bytham terraces provide the means to test this interpretation of coastal dependence by examining sites on the earlier terraces for human presence inland. This work will also examine human occupation of inland areas around 600,000 years ago and the significance of the appearance of new technologies of handaxes and scrapers.

2. To understand human species, cultural groups and fire use during the Hoxnian Interglacial. After the Anglian Glaciation, new human groups returned to Britain around 400,000 years ago, the first with simple tools, followed by a group with handaxes. The project will investigate the different human groups that occupied Britain at this time, their likely source areas in mainland Europe, the significance of handaxes and accompanying technologies such as fire use, from the results of on-going work at Barnham and previous work at nearby Beeches Pit.

3. To examine changes in technology and cultural identity at the regional scale. The river terraces of the Lark and Little Ouse provide a relative sequence of changes in stone tool technology from distinctive handaxes at 400,000 years ago to the introduction of prepared-core technology from about 300,000 years ago. Investigation of the context and dating of existing sites is needed to understand the Breckland regional record, which can then be compared to that of the Thames and Solent areas. Distinctions in tool types and technologies might be identifiable from the different areas, reflecting regional cultural groups. 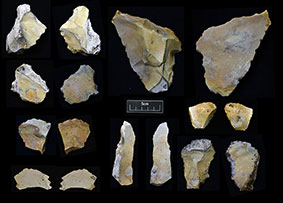 Some of the flint artefacts recovered during on-going excavations at East Farm, Barnham