Disposal of waste materials in landfill sites has its origins in Crete in 3000 BC where waste was placed into soil covered pits (Waste Watch, 2004); however, in the US and Europe waste was primarily disposed of by dumping within cities until the 1800s when the link was identified between poor environmental conditions and disease (National Solid Wastes Management Association, 2008). In the UK, the Public Health Act 1875 required householders to store their rubbish in dustbins and made local authorities responsible for the removal and disposal of waste, which led to the development of the modern landfill. It is worth noting that although the term landfill implies filling a hole with waste (landfilling), it is also used to refer to sites constructed by disposing of waste on the ground and covering it (landraising), such sites have often been used for land reclamation, i.e. raising land above the river or coastal floodplains.

What are historic landfills?

The Environment Agency for England uses the following definition: “A historic (closed) landfill site is one where there is no PPC [Pollution Prevention and Control] permit or waste management licence currently in force. This includes sites that existed before the waste licensing regime, if a site has been licensed in the past, and this licence has been revoked, ceased to exist or surrendered and a certificate of completion has been issued” (Environment Agency, 2010b).

Most historic coastal landfills predate modern environmental regulations and records for them are very limited and often incomplete (Environment Agency, 2013c). Records for individual landfills do not provide details of the materials deposited, and the composition of waste types changed greatly during the 20th century; so, it is usually unknown what types and quantities of waste materials are present within them (Bridgwater, 1986; Burnley, 2007). Before the Control of Pollution Act 1974 (Secretary of State, 1974) there were no requirements to keep records of waste disposed of in any landfill sites. The Waste Management Licensing Regulations 1994 (Secretary of State, 1994) introduced a requirement at all landfill sites accepting controlled waste, i.e. household, industrial and commercial waste or similar waste, to keep records of estimates of the total quantities of biodegradable, non-biodegradable and special wastes within a site and the location of the special waste, i.e. controlled waste with special disposal requirements relating to its potential to pollute. The requirement for more detailed records of waste origin, type, volume and disposal location became mandatory with the introduction of The Landfill (England and Wales) Regulations 2002 (Secretary of State, 2002). These regulations also introduced restrictions on disposing of different classifications of waste, i.e. hazardous, non-hazardous or inert, within the same landfill.

Most modern-day landfills are required to have impermeable liners and leachate management systems to control leakage (Secretary of State, 2002). Most historic landfills were constructed before these environmental protection measures were introduced and may either be lined with impermeable materials (containment landfills) or unlined (natural attenuation landfills), relying to contaminant attenuation in surrounding soils to prevent pollution of groundwater (Bagchi, 1994). However, even modern-day, lined landfills with leachate management systems will eventually leak (Bagchi, 1994; Allen, 2001). 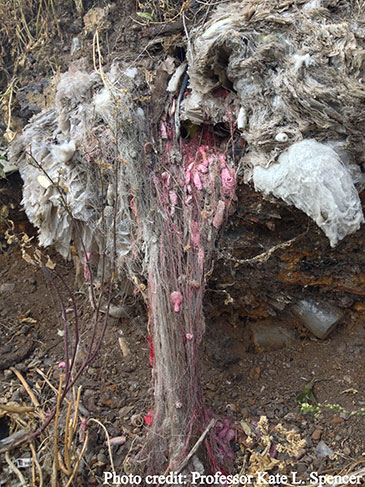 In many areas landfill sites and other areas of contaminated land fall within fluvial (river) and coastal zones that are at risk of flooding and/or erosion. In some locations flood defences were constructed using landfill waste. These contaminated areas are now very vulnerable and there is potential for diffuse pollution to be released to the fluvial (river) or marine environments following inundation of the sites and/or breach of the defences. Some landfill sites in the UK and elsewhere in the world have already started to erode and release waste, e.g. at Northam Burrows in Devon (BBC News, 2012), Bray near Belfast (Belfast Telegraph, 2015), Nunam Iqua in Alaska (Alaska Department of Environmental Conservation, 2015) and Moreton Island in eastern Australia (Dibben, 2010).

Historic landfills are well studied under normal operating conditions, i.e. the waste is fully contained and the sites are not flooded, but there has been little prior research into the effects of flooding or waste erosion on the release of contaminants from these sites (Khoury et al., 2000; Neuhold, 2013).

What is a historic coastal landfill site?

QMUL researchers have used the Environment Agency’s ‘Flood Map for Planning (Rivers and Sea) - Flood Zone 3’ to determine which historic landfill sites are historic coastal landfill sites. The locations of these sites can be seen in the map below. The map also shows the location of the PhD project study sites.

Are there any historic landfills near me?

In England and Wales, there are 19,706 historic landfills recorded in the Historic Landfill Sites National Dataset (Environment Agency, 2017). More sites may exist as it is believed records are incomplete (Cooper et al., 2013). The locations of historic landfill sites are shown in the map tab (above).

How many historic coastal landfill sites are there?