The team and contacts  Presentations and events  Publications

How WhatsApp is transforming everyday political life in India 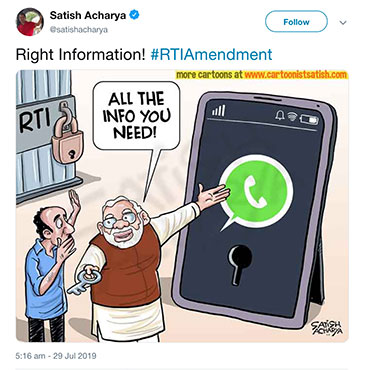 The impact of WhatsApp on the national psyche @satishacharya

Digital technology is typically presented either as the utopia, the answer to deepening democracy, or increasingly blamed for new dystopian realities. Lived realities are much more complex and contradictory. In practice, digital technologies intersect with the social, cultural, economic and political worlds within which they are embedded and become domesticated in anticipated and unanticipated ways. This project examines the everyday practices, experiences and imaginaries of WhatsApp in India.

Since WhatsApp launched in India in mid-2010 it has become the leading digital platform for communication in India with over 400 million active users. There are now more WhatsApp users in India than in any other democracy. Political parties have been instrumental in mobilising the platform not only to organise within political parties, but also to communicate with ordinary citizens and potential voters across India. WhatsApp has increasingly shaped political talk and political imaginaries across the country, from tea stall conversations to ministerial debates. WhatsApp plays an important role in connecting people through trusted networks on shared private digital spaces, however its privacy policies have also been challenged for facilitating ‘fake news’ to go viral, which in some incidences have been connected with violence.

Against this backdrop, our research aims to understand how digital technology, and WhatsApp in particular, is reconfiguring and transforming everyday political life in India. It responds to calls for more nuanced understandings of digital technology beyond western contexts (Chan 2013, Poggiali 2016, Nyabola 2017) and extends an important and timely perspective on the increasing digitality of India’s lived democracy (Michelutti 2008, Banerjee 2013) whilst recognising the persistence of analogue politics and uneven digital realities.

In the first phase of the project, research was conducted in two north Indian cities in the months leading up to and after the 2019 Indian national elections. The project draws on the principles of digital ethnographic methods incorporating participant observation, everyday conversations and in-depth interviews with ordinary citizens and party political actors, focusing in particular on participants’ digital and socio-political lives.

The project is funded by the WhatsApp Misinformation and Social Science and Research Awards. WhatsApp has had no input into the research design, it has not shared any data with us and nor does the company have editorial oversight of our research outputs.