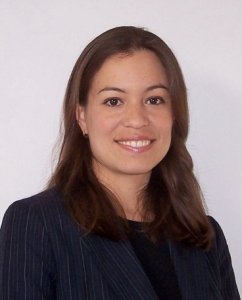 Dr Cecilia Gonzales-Marin qualified as a dentist in 2002 from University of San Martin de Porres (USMP) in Lima-Peru. She then obtained the title of Dental Surgeon through dissertation of the in-vitro study: "Dental brushing at different times in the surface of the demineralized enamel". Her undergraduate studies were highly successful being top two of 142 undergraduate students, with scholarships awarded for high academic achievements, and recognized as the first rank student by the Peruvian Academy of Dentistry (2001). This encouraged Cecilia to pursue further formal specialist training as well as training in teaching and research. She completed a clinical Master in Periodontology between 2004 and 2006 at USMP. This programme included an extensive clinical training in the prevention, non-surgical and surgical management involving all the aspects of Periodontology and Implant Dentistry. Her master's research focused on the use of bone guide regeneration after single extraction to maintain the alveolar ridge for further implant placement.

Her interest in basic-science research brought her to London where she completed her PhD in 2011 at QMUL working with Prof Rob Allaker and Dr Dave Spratt (UCL) in the project: Molecular detection of bacteria from maternal oral origin in complicated pregnancies. For this project, she was awarded the ORSAS Award by the UK Government and later on she obtained the highly prestigious UNESCO-L'OREAL Fellowship For Women in Science awarded each year to only 3 applicants from each continent. Cecilia has also being successful in gaining travel awards to present her work at diverse national and international conferences in Latin America, USA, and the UK.Parallel to her PhD, she had the opportunity to join the clinical staff at Barts and The London SMD as a PT Clinical Tutor in Periodontology.

Formal training in teaching included University teaching at USMP and the Certificate in Learning and Teaching at QMUL. She has also obtained training provided by the National Research Ethics Service including working with NHS patients, obtaining ethics approval, informed consent, Data Protection Act and Human Tissue Act. Cecilia has now been appointed as a FT Senior Clinical Lecturer in Periodontology, in which she will be able to interlace undergraduate/postgraduate teaching and research.

Cecilia's research interests are in the following areas:

Periodontal medicine: Her PhD project focused on the association between periodontal disease and pregnancy complications. Particularly the use of the latest molecular techniques to identify patterns of bacteria in infection-related complicated pregnancies demonstrated the possibility that Fusobacterium nucleatum, in combination with Porphyromonas gingivalis and other periodontal pathogens, could translocate from the maternal oral cavity to the amniotic environment and thus be involved in pregnancy complications.

Molecular Microbiology:  The use of molecular techniques allows the study of associations not previously able to be investigated with routine culture. A range of molecular microbial technologies such as PCR, quantitative-PCR, DGGE, cloning and sequencing and new generation sequencing can be applied with particular interest in F. nucleatum and its ability to interact and translocate distantly with other periodontal pathogens. Also, the different subspecies of F. nucleatum and patterns of colonisation intraorally and in different body sites is the topic of her interest.

Clinical Periodontology: Other areas of interest include patterns of bacteria in the oral cavity in periodontal health and disease. Cecilia is currently designing a simplified technique for the investigation of F. nucleatum and subspecies which will allow its use in clinical trials to help understand their association with periodontal and systemic diseases.

Other research: The use of tissue culture and animal experimentation could be applied to understand bacterial interactions, pathogenicity and means of translocation of these bacteria.