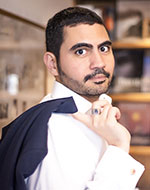 He was the Professor of International Law, Trade and Policy at CCLS until 2018. His academic career, distinguished by its breadth disciplines and his wealth of experience and expertise, is known for being at the cutting edge of the intersection of law and policy. Before joining the Queen Mary faculty, Professor Dahlan practiced regulatory law for fifteen years across many sectors including energy, defence, trade, government affairs, rule of law among others. His experience in renewable energy extends beyond legal practice into investment and entrepreneurship, as he owned the Gulf’s first private renewable energy company and was the international chair of the largest renewable energy private equity fund in the world.

At CCLS, Professor Dahlan sits on the Advisory Council. He was also a Professor of the Energy Law Institute (ELI) and a member of the ELI Steering Board. He leads the Trade Initiative and sits on the Sovereign Wealth Funds (SWFs) Working Group. He taught Energy Law and Ethics, Renewable Energy Law and Energy Geopolitics; and supervised LLM and PhD dissertations on trade, energy and ethics, investment, Investor-State Disputes (ISDS), and dispute resolution.

Professor Dahlan is the Principal of Quraysh. He trained as an international lawyer focusing on international trade law, transnational legal problems and investment law. He developed a career in international alternative dispute resolution in parallel. He is a CEDR certified mediator and focuses on political mediation and investor-state dispute settlement (ISDS). Professor Dahlan served on the Board of Directors of the International Mediation Institute in The Hague. He is also a Fellow of the Chartered Institute of Arbitrators (CIArb) and the Royal Society of Edinburgh (RSE).

As for policy and academic activism, he is an expert in transitional political economy, energy law, development and trade regionalism, negotiation theory, transnational political entrepreneurship and track-two diplomacy. He has written and advised on matters regarding international law, dispute resolution, global and regional governance, legislative affairs, defence, energy, and foreign relations.

He was appointed a UN Constitutional Expert (and one of ten Regional Experts in Constitutional Affairs, Oil and Gas selected by the United Nations Assistance Mission for Iraq). After having practiced at White & Case LLP in New York and Washington DC for several years, he founded iQ and was the founding Director of the Qatar Law Forum of Global Leaders in Law and was Special Adviser to The Rt. Hon. the Lord Woolf of Barnes, Former Chief Justice of England and Wales. Inspired by the transformative time and promise of the Obama Administration, he established a Middle East Practice affiliation between iQ and the law firm of late US Secretary of State Dean Acheson’s Washington DC-based, Covington & Burling LLP, and headed it for more than six years.

During his time in practice, he acted as an outside counsel for many businesses, institutions, organisations, and government entities, including: Twitter Inc.; Microsoft; Northrop Grumman; The Smithsonian; Lloyd’s and others. He has worked on numerous ground breaking initiatives in the Arabian Peninsula, including Doha’s $8.67 billion Specialty Teaching Hospital and the $47 billion Saudi Economic Cities Project. He was the Senior Executive at the Qatar Financial Center, establishing its Judiciary; the Qatar Financial Centre’s Civil and Commercial Court, and Regulatory Tribunal, where he also served as the first Director for the International Alternative Dispute Resolution Centre. He advised the Foreign Commonwealth Office on post 9/11 Islamic relations. He also advised the United States Trade Representative on the accession of Saudi Arabia, and the Gulf Cooperation Council to the World Trade Organisation.

He held and continues to hold adjunct and visiting professorships around the world, including, Shanghai, Singapore, Cambridge and Harvard. He is an Honorary Professor of Shanghai University of International Business and Economics, an Adjunct of Rand Europe and sits on its Board of Advisers, an Advisory Board member of the Institute for Legal and Constitutional Research at the University of St. Andrew’s, and a member of the Boston University Pardee School of Global Studies Dean’s Advisory Board. He is an Honorary Fellow of National University of Singapore Middle East Institute, and sits on the editorial board of Defence Strategic Communications, NATO’s academic journal.

Professor Dahlan is a dedicated philanthropist and advocate for ethical action and investment period. In the area of climate action he was the founder of The Scotia Group which was dedicated to support the success of The United Nations Framework Convention on Climate Change (UNFCCC) at COP26 in Glasgow. He serves as a member of Massachusetts General Hospital President’s Council, International Advisory Council and Mass General Brigham Corporation Member. He was Chair of the International Section of the Harvard Law School Association and member of the Executive Committee (2012-16). He is the founding President of the Harvard Law School Association of Arabia.

Professor Dahlan attended Belmont Hill School in Belmont, Massachusetts. He read law at the University of Jordan in Amman where he obtained his (LLB). He studied for three Masters degrees at Harvard University, in special studies in Government at the Graduate School of Arts and Sciences, at Harvard Law School where he received an (LLM), and at the Harvard Center for Middle East Studies (AM in History). He attended Selwyn College Cambridge to receive his English legal training. He obtained the (Āleimiyya) Professorial Habilitation (Prof. Dr. jur.) in Law and Legitimate Public Policy at Al-Azhar University, completing the Higher Doctorate of Law with Distinction and Honor Merit in the First Rank.