Double-Appointment: Professor Maxi Scherer elected as Vice President of the London Court of International Arbitration and appointed on ICSID Panel of Arbitrators 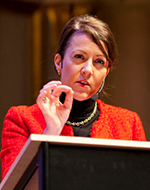 The LCIA is one of the longest-established international institutions for commercial dispute resolution. Its Court of Arbitration deals with the selection and appointment of arbitrators, challenges to arbitrators, and is the final authority for drafting the LCIA’s arbitration rules and issues arising under those rules. A President and seven Vice Presidents head the LCIA Court. Professor Scherer was elected as a member of the LCIA Court one year ago and will serve as Vice President until her five-year term on the Court ends.

Professor Scherer was also appointed to the Panel of Arbitrators of the International Centre for the Settlement of Investment Disputes (ICSID). ICSID, an affiliate of the World Bank, is the main international dispute resolution forum administering investor-State disputes. She will serve a six-year term.