Clinic Collaboration: qLegal soon to be registered as a trademark by Northumbria Student Law Office

On 15 April 2015, two students from Northumbria University in Newcastle (Charlotte Stapleton and Joseph David Muir) came to London to advise on the registration of 'qLegal' as a trademark. 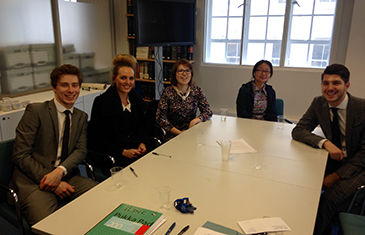 The two teams of students had met earlier this year for a first interview to discuss the case. The aim of this second meeting was to submit the trademark application on the Intellectual Property Office’s website. But first, advisors and clients had to agree on what to protect (the 'qLegal' name, the logo or the slogan) and which classes of the Nice classification they should apply for.

Discussion ensued about the best strategy to adopt. The student advisors explained that while applying for the three qLegal mark, logo and slogan registration was possible, it might not be as cost efficient and strategic as expected.

Acceptance of the application for registration by the Intellectual Property Office can never be guaranteed in advance. Indeed, the Office is sovereign to assess if the mark is not descriptive and distinctive enough to be registered. The qLegal logo for instance would easily be found distinctive thanks to its form and design.  The qLegal slogan -'The small print for BIG ideas' - may also come across as distinctive. However, the Intellectual Property Office has , in the past refused several other slogans, and no guarantees could be given by the Northumbria team as to whether it would be accepted or not. However, the qLegal team were instructed that due to its 'q' lower case at the beginning, the mark “qLegal” would appear to be reasonably distinctive and not too similar to existing trademarks.

After negotiation, preference was eventually given to the registration of the word 'qLegal' as a mark first, as it covers all the uses of the trademark, whether verbal or printed, even inside a logo. The qLegal team were advised that to register the logo another application would be necessary and can be completed after. All parties agreed to apply for class 41 (mostly education and provision of training) and 45 (which covers services such as legal advices, legal services and consultancy, etc) of the Nice classification as they were the most relevant classes to qLegal activities. 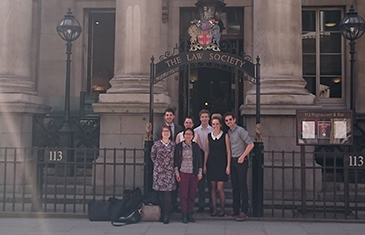 After the completion of their application the students visited the historical Law Society of England and Wales, which was founded in 1825

The students chose a 'right start application' (which costs £100 when applying, and £100 afterwards if the clients decide to go ahead). It is a bit more expensive than a 'standard' application (£170 upfront) but has the advantage of reducing the cost in the case the application is rejected. Students representing qLegal were also made aware of the average 3 month waiting period for the outcome of their application.

Students from both universities further discussed their involvement in this case and were very enthusiastic about the clinic collaboration experience. qLegal students were impressed by the professionalism of their fellow advisors and praised them for the advice they received.