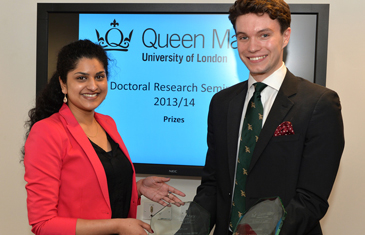 The Queen Mary Law Research Seminar Series gives PhD students the chance to give a presentation on their thesis topic to an audience of peers. The series also includes talks from visiting scholars from around the world.

Each year the series ends with a reception and awards ceremony. This year the ceremony was held on 17 March and three individual awards were given for the best presenter, best slides and best presentation.

Sam Fowles won Best Presenter for his presentation 'The Empire Strikes Back: FGM Through the Lense of Hybridity '. His presentation at the awards ceremony on 'Prosecutorial Discretion and the Separation of Powers: Finding the Right Balance for South Africa' won him the Best Presentation award.

This year's series featured presentations as diverse as 'Should living organisms be patentable?' and 'Trusts: A View from the Archives'.

The seminar series is organised by Dr Tom O'Shea was chaired by three PhD representatives, Tom Hannant, Sangeetha Manavalan and Niovi Vavoula. The next series will start in October 2014.