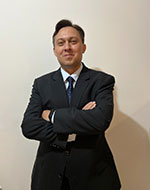 Director Master in innovation and digital Law and Legal Tech Universidad Sergio Arboleda and Arbitrator Chamber of Commerce of Bogota, and President of the Colombian Legal Tech Association

Germán is a born leader who has used his experience at CCLS to profoundly influence the development of law in his country of Colombia. Germán has exerted that influence since assuming different roles in academia, the private sector and government. His leadership has been echoed to such an extent that his projects such as the virtual courses on copyright and creative industries for the National Directorate of Copyright that he carried out in 2012, just after returning from London, are a world model according to the World Intellectual Property Organization WIPO. His constant desire to lead processes has led him to be a leader in Colombia in the fields of digital law and legal tech, intellectual property and national and international arbitration.

He has a high sense of belonging to CCLS and to Queen Mary. He has been an Alumni Ambassador since 2011 and a significant number of Colombian students have studied at Queen Mary, particularly on the master's degrees that CCLS offers, as a result of his promotion. Additionally, Germán has always cited CCLS and Queen Mary in his extensive academic career that includes the publication of six books and a significant number of academic articles. In this sense, Germán published an article in 2012 in the nascent Queen Mary IP Journal and they have accepted an article again in 2022.

Germán has held more than 30 events in the last 10 years in which he has worked together with various CCLS teachers such as the prestigious Uma Suthersanen, Rodrigo Olivares-Caminal, Guido Westkamp and Loukas Mistelis. These events have had great relevance in the world of arbitration, international commercial law and intellectual property, not only in Colombia but in the entire Latin American region.

He has always been an ambassador for CCLS of Queen Mary for what he has achieved in his career. In his 18-year career, Germán currently stands out for being the Director of the Master's Degree in Innovation in Digital Law and Legal Tech of the Escuela Mayor de Derecho of the Sergio Arboleda University and the only one in Latin America. This has catapulted him to be, since 2020, President of the Colombian Association of Legal Tech in which he is leading part of the transformation of law in Colombia through different alliances, events and projects with both law firms, technology corporations, high courts and government.

Germán has also had a great performance as legal advisor, and consultant to the Superintendence of Industry and Commerce, National Directorate of Copyright, Inter-American Development Bank, the Superior Council of the Judiciary, the Government of Cundinamarca, among others.

He teaches intellectual property, law and innovation, digital law, legal tech, competition law, arbitration, commercial and telecommunications law at both the undergraduate and master's levels at several Latin American and European universities. Germán has also been an outstanding Arbitrator of the Arbitration and Conciliation Center of the Bogotá Chamber of Commerce. He has also been President of the Network of Associations of British Universities in Colombia Redbrit during the years 2017 to 2020. There he promoted British culture in Colombia and as a Queen Mary alumnus, he led more than 1,500 graduates from different universities in the United Kingdom in Colombia.