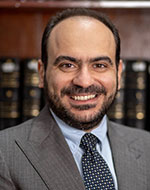 Several months after Amir finished his PhD in Competition Law from CCLS in 2015, he was appointed as an advisor to the Chairman of the Egyptian Competition Authority (ECA) to lead the authority’s intervention in the area of broadcasting of media rights. In a matter of a few months, he led four successful investigations against big media corporations and football associations. The investigations in such cases as the Confederation of African Football (CAF) and FIFA cases paved the way for significant changes in the world of African football and triggered several regional corruption investigations in the world of African football. These cases were litigated successfully in Egypt and marked the first ever national precedents in the area of abuse of dominance.

Following such success, in 2018 Amir was appointed as the chairman of ECA at the age of 32, to be the youngest Chair in the history of ECA and the youngest leader of a governmental body in Egypt. As the chairman, he worked hard to bring ECA to the international standards of antitrust enforcement. Such efforts were praised by the European Commission and CMA officials in public events. This was following his intervention in the biggest antitrust investigation in the digital economy in the landmark Uber case, that marked the biggest intervention of a competition authority in the African continent and the middle eastern region.

During his tenure, he worked jointly with the IMF on Egypt’s structural reform program that proved key for the country to overcome Covid-19 and the supply chain crisis currently wreaking havoc across the globe. For the reform project he led, he was honored to receive praise from international organisations such as the OECD which elected him for two consecutive years to chair and moderate high profile debates at the OECD World Competition Forum. For leading and implementing the structural reform project, Amir was awarded the Business Today award that honors top influential figures positively impacting the Egyptian economy. He was further honored to receive presidential acclaim for his efforts and was described by the German Chancellor Angela Merkel as one of the successful areas of economic cooperation between Egypt and Germany.

These achievements helped shape a competitive market economy and inspired similar good practices in the region. His work directly helped in reducing prices, job creation and economic growth in several sectors. Yet most importantly, it also inspired good governance and contributed to more regulatory neutrality as a key element for economic growth.