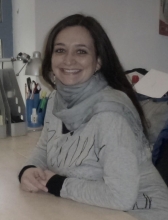 I am a graduate of the University of Provence, Aix-Marseille, France. I have a Licence (BA equivalent) in English Language, Literature & Civilisation (LLCE Anglais) and a Maîtrise (MA equivalent) in English LLCE (specialized in English Phonetics). I also have a DEA in "Sciences du Langage" (MPhil equivalent) with the same specialization field. I completed, in December 2011, a PhD (University of Provence, France) in Linguistics, more precisely in English Phonetics which aims to analyse the prosodic characteristics (intonation, rhythm, final lengthening) specific to the English spoken in Wales and see if there is an imprint of the Welsh language on the English spoken in this country. I have developed my academic career at:• the University of Provence - Aix-Marseille Université (as an ATER, a Temporary Language Teaching & Research Assistant in English Phonetics from 2004-2007) • Queen Mary University of London (first as a Lectrice in 2007-2008, then from Sept 2008 to December 2010 as a French Language Teaching Assistant and since January 2011 as a French Language Instructor + interim French Language Studies Co-ordinator from June 2012-March 2013) • City University (as a French Language Tutor from April 2008 to July 2011) • Birkbeck College (as a Visiting Lecturer from Sept 2008 to June 2011).

Title: Prosodic characteristics specific to the English spoken in Wales : the influence of the Welsh language.

This thesis has three main objectives. First of all, to contribute to the study of the rhythmical system of languages and dialectal varieties through the analysis of rhythms in Welsh English and Welsh, using Standard English as a focal comparative element; then, to demonstrate that the final lengthening is much more notable in Welsh and  in Welsh English (bilinguals and monolinguals) than in standard English; finally, to prove that this study's results are tightly intertwined with the influence of the Welsh language, which is greater than that other English accents present in this country. For that purpose, we have first widened the Eurom 1 database and then carried out various perception tests and statistical analysis. The results show that the Welsh language is the substratum of the English spoken in Wales, as much for bilinguals as for monolinguals (residents of the country speaking only English). Indeed, the length of the final unstressed syllable decreases from Welsh to Standard English. However, as it is impossible to classify with precision the rhythm of Welsh and Welsh English taking into account all the metrics, it is more difficult to establish with certainty whether the Welsh language has a major influence on the latter.

I have been organising Christmas drinks parties and the end of year show (which is a nice way to end up the academic year all together!) for the past 5 years. These social events help build a stronger departmental identity.