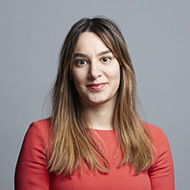 Senior Lecturer in Migration and Security

Dr Niovi Vavoula is Senior Lecturer (Associate Professor) in Migration and Security, specialising in EU immigration, criminal and privacy law at Queen Mary University of London. She is Associate Editor of the New Journal of European Criminal Law (NJECL), and member of the ODYSSEUS Academic Network for Legal Studies on Immigration and Asylum in Europe, and the European Criminal Law Academic Network (ECLAN). She is an analyst for EU Live and affiliated to Statewatch to which she regularly contributes with short analyses. She was previously a visiting scholar at ULB - Université Libre de Bruxelles (2014), George Washington University (2022 – Society of Legal Scholars Grantee) and European University Institute (EUI) (2022). She has been the co-cordinator for the United Kingdom (with Violeta Moreno-Lax) in the Jean Monnet Network MAPS (Migration and Asylum Policy Systems) (September 2019 – May 2022), a member of the UK-Irish Criminal Justice Cooperation Network on the future cooperation between the UK and Ireland post-Brexit (January 2019 – September 2020) and a member of the Jean Monnet Network ‘The European Union at the Crossroads of Global Order’ (EUCROSS) (October 2017 – February 2021). Between 2017-2018 she was Post-Doctoral Research Assistant at Queen Mary, University of London and taught EU Law at the London School of Economics and Political Science (LSE). Dr Vavoula holds a PhD (2012-2017 – pass without corrections) and an LLM in European Law (2011 – and recipient of the award for best LLM student specialising in European Law) from Queen Mary, University of London, and an LL.B. from the National and Kapodistrian University of Athens (2008). Before commencing her doctoral studies she volunteered for the Legal Department of the Greek Council for Refugees and did an internship for the Greek Desk of Eurojust.

Dr Vavoula conducts research in the fields of EU Immigration law, EU Criminal law and EU Data Protection law. Her research agenda develops along three strands. The first research strand revolves around the digitalisation of EU immigration control with insights into international and national initiatives. At its core are the fundamental rights challenges, particularly those relating to the rights to private life, data protection, effective remedies and the principle of non-discrimination, raised by the setting up and operation of EU large-scale information systems for third-country nationals and their interoperability. This was also the topic of her monograph, in which she studies the compatibility of the legal instruments governing information systems and their interoperability with the right to respect for private life.

In connection to both strands, the use of Artificial Intelligence (AI) techniques, such as facial recognition and algorithmic profiling, and the fundamental rights challenges it raises fall within her research interests.

Dr Vavoula’s third research strand concerns the normative foundations and the impact of the criminalisation of irregular migration to both irregular migrants who breach domestic immigration laws and to third actors connected with their irregular status, including those providing humanitarian assistance.

Dr Vavoula regularly provides expert advice to EU institutions and agencies as well as civil society organisations in her areas of specialisation. In addition to the (co-)authorship of studies and policy papers published (European Parliament, CEPS, ECRE).

Consultancy provided (in addition to consultancies resulting in (co-)authored publications: