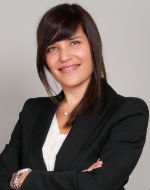 Tibisay is a public international lawyer and teaches and publishes in the areas of international energy and climate change law, international economic law, international arbitration, and territorial and maritime delimitation. She holds a PhD and a Masters in International Law from the Graduate Institute in Geneva (2016; 2011), an LLM from Harvard (2014), and a Laurea Magistrale in Giurisprudenza from the Università Cattolica in Milan (2009). She was admitted to the Bar in Italy in 2014. Her native languages are Italian and Spanish, and she is fluent in English and French.

At QMUL, Tibisay is Deputy Chair of the LLM Examination Board and has been recently appointed to the IHSS (Institute for the Humanities and Social Sciences) Climate Emergency Working Group. She also co-directs a pilot legal clinic in international economic law which is part of the TradeLab network.

Before joining QMUL, Tibisay was a Swiss National Science Foundation (SNSF) Postdoctoral Fellow at the University of Cambridge (she was based at C-EENRG, where she is still a Fellow). At Cambridge, she lectured in international environmental law in the MPhil in the Department of Land Economy and taught international law at Trinity Hall. Prior to this, Tibisay worked as an associate in the Public International Law Practice and in the International Arbitration Group at Freshfields Bruckhaus Deringer LLP in Paris. She has also consulted for the European Commission as well as Chatham House, Client Earth, and the International Centre for Trade and Sustainable Development (ICTSD).

As of the 2021/22 academic year, Tibisay co-directs and co-teaches a pilot legal clinic in  SOLM263 International Economic Law Clinic (TradeLab)

In 2020, Tibisay received special recognition for the quality of her teaching from the Vice Principal for Education and the HSS Dean for Education.

Her specialism is bilateral energy agreements. Her book, entitled ‘State Energy Agreements’, forthcoming in 2022 with Cambridge University Press, analyses an original dataset of over 600 bilateral state agreements regulating a variety of energy resources and activities, ranging from the production of hydropower and nuclear energy to the cross-border transportation of oil and gas. The book uses this dataset to generate a taxonomy of these legal instruments with a view to mapping this hitherto largely unstudied field, situating these agreements within the broader corpus of international law.

Tibisay’s broader research focuses on the different ways in which international law is influenced by private economic interests, both from a doctrinal and an ethical perspective. In an article entitled ‘Arbitration and Offshore Resources in Disputed Maritime Areas’ (OUP, 2020), she looked at the way that international law on maritime boundary delimitation is driven by the economic interests of private foreign investors (oil companies), despite this factor appearing at most only indirectly in case law and doctrinal analyses. Tibisay is currently following this up in an empirical and doctrinal research project which maps territorial and maritime conflicts around the world in light of the presence of disputed resources in these areas.

Tibisay also works on ways in which international law enables, enhances and in some ways hinders the transition to a sustainable and carbon-free economy. She has co-authored two articles on different aspects of the (synergetic but also conflictual) relationship between energy security and the energy transition (OUP, 2020; Edward Elgar, 2021). She has also recently completed two articles (one on parent company liability, the other on forum non conveniens) looking at different ways in which oil and mining companies based in the Global North can be held liable for environmental and human rights harms caused by their foreign subsidiaries in the Global South.

Other research projects and consultancies

In 2020, she authored a report on process and production methods (PPMs) in international trade. The report was published by Client Earth as ‘International Trade Rules and Environmental Protection Measures – Import Restrictions and Process Production Methods (PPMs) under the General Agreement on Tariffs and Trade’.

In 2018 and 2019, Tibisay consulted for the European Commission, working on projects related to trade and human rights, and energy connectivity (in particular the EU model of electricity transmission networks, ENTSO-E) respectively.

In 2018, she contributed to a report on ‘Human Rights Impact Assessments of Trade Agreements’ for Chatham House.

In 2017, Tibisay co-authored a research paper on fisheries subsidies in the WTO, which was commissioned and published by the International Centre for Trade and Sustainable Development (ICTSD) to assist negotiators at the 2017 WTO Ministerial Conference in Buenos Aires.

She is currently working on a research project for the American Center for International Labor Solidarity on the WTO legality of import bans on products produced in violation of international labour standards.

During her SNSF Postdoctoral Fellowship at Cambridge, Tibisay published a dataset of bilateral energy agreements as part of a research project funded by the SNSF, the Philomathia Foundation and the University of Cambridge.