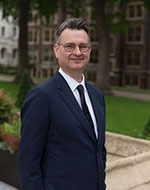 He is the author of over 60 publications on intellectual property law and is co-editor of the Research Handbook on Intellectual Property and the Life Sciences. He teaches European, U.S and international patent law to postgraduate law students and he is an expert on the patent provisions of the WTO Agreement on Trade-Related Aspects of Intellectual Property Rights (TRIPS). His research interests include: intellectual property responses to Covid-19, the relationship between competition law and patent law, the role of patents in the governance of genome editing technologies, IP responses to Covid-19, intellectual property law in China, and the law and practice of the Unified Patent Court of the European Union.

He is interviewed regularly by international media outlets including the Financial Times, The Wire, Fortune, Pharma Technology Focus and Aljazeera.

He is currently co-editing (with Professor Paul Torremans, University of Nottingham) a Handbook on European Patent Law, which will be published by Walter de Gruyter GmbH in late 2023.