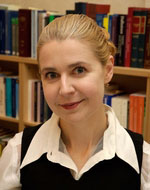 Professor Gibson has research interests in the creative industries, particularly fashion and film, and animal behaviour and welfare law and policy. She has a research and education background in cultural studies, critical theory, film, art history and law, and in animal behaviour science and welfare. Johanna maintains interdisciplinary research interests and publications. The Logic of Innovation (2014) explores the complex terrain of creativity, ownership and use in the digital environment. Her earlier book on the relationship between intellectual property systems, protection and the narration of culture and innovation, Creating Selves: Intellectual Property and the Narration of Culture (2006), was cited with approval in an independent government review of intellectual property.

Johanna is also researching on animal welfare and public engagement, including novel and interdisciplinary modes of dissemination and policy impact, as well as the relevance of behaviour science in development and implementation of law and policy, particularly in relation to companion animals. Part of this research is also concerned with human-animal interaction, disability legislation, assistance animals, and access, with a focus on animal behaviour and animal-assisting learning and therapy. Johanna is also an academic member of the Association for the Studies of Animal Behaviour (ASAB), a member of the Universities Federation for Animal Welfare (UFAW), the International Society for Applied Ethology (ISAE), and shares her home with four rescue dogs and four rescue cats.

Johanna has led a major research consultancy for the Authors’ Licensing and Collecting Society (ALCS) on authors’ earnings (pre-launched as “What Are Words Worth Now” in the House of Commons in 2014) which has received considerable international press. Her major report to the IPO on Lookalikes  [PDF] (co-authored with Professor Phillip Johnson and Professor Jonathan Freeman) was cited in Parliament during debates on the Intellectual Property Act 2014 and led to major a consultation by the Department of Business, Innovation and Skills.

Johanna was also supported by an AHRC grant to examine patents and biotechnology in the research project, Patenting Lives, including the ethics of animal species and integrity in the context of biotechnology research. The project culminated in an international conference, with selected papers being included in the edited collection Patenting Lives: Life Patents, Culture and Development (2008) and contributed towards a monograph, Intellectual Property, Medicine and Health (2009), which she has just revised as a second edition, published 2017.

Johanna has also worked extensively in the area of traditional and indigenous knowledge, including her first book Community Resources: Intellectual Property, International Trade and the Protection of Traditional Knowledge (2005).