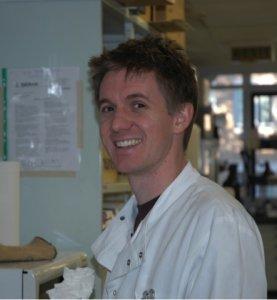 Tom Nightingale completed his undergraduate studies at the University of Bath (M.biochem) and obtained his PhD at the University of Oxford. Subsequently, Tom worked with Prof Daniel Cutler at the Laboratory for Molecular and Cellular Biology at University College London and joined the Centre for Microvascular Research at the William Harvey Research Institute in 2013. Tom is establishing his own research group to investigate the effect of intracellular trafficking of endothelial cell adhesion molecules on leukocyte extravasation.

Research in my lab centres on the cell biology of endothelial cells during injury and inflammation.

Currently two projects are running in the laboratory:

Leukocyte recruitment from the blood vascular to infected tissues is a crucial part of the normal inflammatory response and allows clearance of pathogens from the affected area. However in some situations inappropriate and excessive recruitment of leukocytes can result in chronically inflamed tissues. The control of this process is therefore central to a normal resolution of an inflammatory situation.

The blood vascular endothelium plays a key part in this process as a number of endothelial cell surface receptors such as P- and E-selectin, CD31 and the Junctional Adhesion Molecules (JAMs) have important roles in the recruitment and transmigration of leukocytes through blood-vessel walls. Some of these adhesion receptors such as Jam-C are known to undergo intracellular trafficking and are found on intracellular vesicles and non-junctional plasma membrane following certain stimuli. My research centres on the mechanisms and machinery required for this intracellular trafficking and the subsequent impact on transmigration of leukocytes through the endothelial cell layer.

The response to vascular injury or infection is fast; this minimises loss of blood and spread of pathogens. As such, endothelial cells harbour specialised rod shaped storage organelles (WPB) that contain multiple pre-made pro-inflammatory and pro-haemostatic proteins. Within minutes of endothelial cell stimulation WPB are exocytosed and release their stored content into the vasculature thus starting the processes of both haemostasis and leukocyte recruitment. The most important haemostatic component of WPB is the glycoprotein VWF that comprises 90% of stored protein. Upon exocytosis these tubules are unfurled by the shear force present in the blood vasculature to produce millimetre-long protein strings revealing multiple binding sites for platelets. Failure to secrete properly processed VWF either due to mutation of the protein itself or due to defects in cellular machinery associated with WPB formation result in bleeding (Von Willebrands disease). Conversely, a failure to appropriately remove VWF from the blood stream due to an inactivity or absence of the shear dependent metalloprotease ADAMSTS13, results in thrombotic thrombocytopenic purpura, a syndrome that is typified by multiple microvascular occlusions. These two syndromes additionally serve to highlight the importance of VWF in cardiovascular disease and stroke. Animal models and patients with VWF disease exhibit a decreased incidence of atherosclerosis. Conversely patients with elevated levels of VWF have an increased risk of major cardiac events and stroke.

We are investigating novel means to regulate VWF secretion that are controlled by an actomyosin ring. By understanding this mechanism we hope, in the long term, to develop novel strategies for limiting cardiovascular disease and stroke.