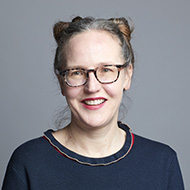 Caroline Morris joined Queen Mary, University of London, as a lecturer in public law in 2010. Previously she was a visiting lecturer and tutor in public law at King’s College London (2009-2010) and a senior lecturer at Victoria University of Wellington, New Zealand (2001-2009 (lecturer 2001-2005)). Before commencing her academic career, Caroline was the judicial assistant to Lord Woolf, MR at the Court of Appeal and then a legal advisor at the New Zealand Ministry of Justice.

Caroline's research focuses on democracy – both the representative and direct forms. She is an acknowledged expert on citizens’ initiatives, and is a member of the International Advisory Board of IRI-Asia. She also maintains an interest the experiences of women within the legal system, particularly in the areas of reproductive rights and legal education.

Dr Morris welcomes approaches from students interested in electoral law (not including political financing laws), Westminster constitutional law, the law of small states and jurisdictions (including the British Overseas Territories and Crown Dependencies), and the history of early women lawyers.