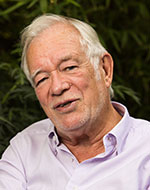 Seán McConville began his career in prison (on undergraduate placement, it should be said) and has made punishment and penal policy a focus of study and teaching for the last several decades. He has served as a litigation consultant across the United States, worked for the House of Commons and Council of Europe, and advised government bodies on both sides of the Atlantic. He also served as a magistrate in Cambridge and London for sixteen years. Litigation has taken him into troubled, gang-ridden, and violent institutions, interviewing inmates, staff and professionals, assessing conditions and relating what he uncovered.

For a trilogy on politically motivated prisoners (Routledge 2003 - 2021) he drew on numerous archives in Australia, Ireland, the United Kingdom, and the United States. He also interviewed a wide range of people who participated in, tried to resolve or who were affected by the conflict in Northern Ireland and beyond. This work and great range of contacts beyond the world of higher education has fed into his teaching and has also provided a basis for various policy proposals.

Interviews have been a key part of his work for many years. This developed into a more general interest in the challenges and possibilities of interviewing, not only as a research tool but as a means of dealing with the past and promoting community healing and reconciliation.

Around this core he has followed his interests in various other directions, including prison and institutional architecture and design, Islamic criminal law, law and poverty and research design and methodology. In 2021 he published the fifth in his multi-volume penal history, Irish Political Prisoners, 1960 – 2000: Braiding Rage and Sorrow. Seán has contributed to major British and US newspapers, is an experienced broadcaster and in pamphlet and essay from time to time contributes to current policy debates.

Seán McConville has been publishing since 1975 in various formats including essays, monographs, pamphlets, textbooks, works of reference, official reports, investigations and newspaper and journal articles. Most recently he completed the fourth volume of the history of punishment and imprisonment (Irish Political Prisoners 1920-62: Pilgrimage of Desolation (Routledge, 2013)). Previous books in the series have dealt with Irish political prisoners during the period of formation of modern Irish nationalism (Irish Political Prisoners 1848-1922: Theatres of War (Routledge, 2003)) as well as eighteenth and nineteenth penal policy (A History of English Prison Administration (Routledge, 1981) and English Local Prisons 1860-1900: Next Only to Death (Routledge, 1995)). He published the final volume in his Irish trilogy in the spring of 2021: Irish Political Prisoners 1960-2000: Braiding Rage and Sorrow.

He has collaborated with colleagues at various points in publishing several collections of essays, including The Use of Punishment (Willan, 2003: substantially funded by the H.F Guggenheim Foundation) and “Engels and Fenianism: Reflections upon Alchemy”,  (Marx-Engels Yearbook 2011, Berlin, Marx-Engels-Gesamtausgabe).

Drawing on research skills developed over many years and across several projects, and with Anna Bryson as co-author, Seán McConville has published The Routledge Guide to Interviewing.

Professor McConville welcomes well thought-out proposals from those wishing to enrol for the MPhil or PhD: penal policy and administration (historical, contemporary and comparative) and related topics in modern Irish history are preferred, but others would be considered.