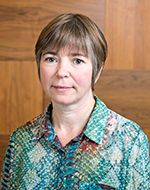 Ruth Fletcher joined Queen Mary’s School of Law in September 2013, where she teaches and researches in medical law. Before that she was a Senior Lecturer at Keele University where she taught on a range of undergraduate and postgraduate courses, including Healthcare Law and Medical Ethics and Law. During her time at Keele, Ruth was Director of the Centre for Law, Ethics and Society, Postgraduate Director for Social Sciences, and Associate Director of the AHRC Centre for Law, Gender and Sexuality.

Ruth’s research addresses the relationship between law, health and society through the lens of reproduction. She has an ongoing interest in law’s reproductivity: the generation of new legal forms through the synthesis of already existing legal forms. This has produced critical readings of new governance as it emerges through civic exchange on public health issues. It has also led to more abstract critiques of Pashukanis’ concept of legal form.

Secondly, Ruth’s research is concerned with the practical everyday ways in which health, sexuality and reproduction become objects of legal struggle. Much of her work in this area has focused on documenting and critiquing the kinds of arguments and strategies that are generated in the regulation of abortion. Ruth’s current major project, a monograph-in-progress entitled Peripheral Life: Governing Travel for Abortion Care, investigates the significance of shifting abortion restrictions and transnational travel strategies, and draws on ESRC funded research into support networks for abortion-seeking women.

Thirdly, Ruth is interested in reproduction as a key site of law and gender. She is Co-investigator of the AHRC ReValuing Care network an international, interdisciplinary network which aims to create spaces for dialogue about care across a range of contexts. Ruth was Associate Director of the AHRC Centre for Law, Gender and Sexuality between 2004 and 2009.

Ruth welcomes the opportunity to advise research students on topics in medical law, socio-legal engagement on health issues, feminist thought and practice, and socio-legal theory. Ruth has supervised a range of PhD projects to completion in critical socio-legal studies on topics such as teenagers’ reproductive rights, the bar dancing controversy in India and feminist theory. Prospective PhD students are welcome to solicit an ‘initial opinion’ on their PhD applications.

Ruth is an Editor of Feminist Legal Studies and welcomes inquiries from prospective contributors. She has worked with civil society groups on healthcare issues, presented to a Parliamentary Health Committee and been interviewed by a range of news media.

She is also a member of the Centre for Law and Society in a Global Context (CLSGC).