A series of thought-provoking plays, aimed at raising the awareness of the controversial issue of human abuses carried out by international businesses working in developing countries, will be premiered across the UK. 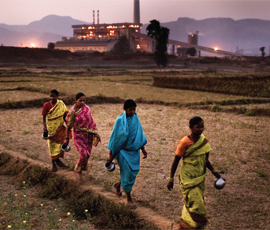 Peter Frankental, of Amnesty International UK, commented: "With their corporate power comes the responsibility to ensure that human rights are respected across companies' global operations and supply chains. From factory collapses in Bangladesh to the deaths of migrant construction workers in Qatar, businesses all too often stand on the sidelines allowing heinous abuses to take place.  Amnesty International is delighted to be part of this pioneering project to use theatre to communicate these issues to a range of audiences."

Professor Dignam has 20 years experience of working with Amnesty and researching companies and human rights issues, what they are and how to avoid them.

Based on real life cases, Professor Dignam has written three 10-minute dramas known as 'legislative' plays, which will be premiered in Dublin, Belfast, Cambridge and London from 17-26 October.

The plays deal with themes such as water management by foreign companies, the UK policy towards its businesses and human rights abuses abroad and how to engage with local communities when investing in developing states.

He explains: "There are reoccurring themes in the plays which look at how businesses communicate with local communities overseas and the mistakes they keep making.

One of the plays looks at the repercussions of what happens when a government hands over its water management to a private foreign company, the closing of a well, the tensions that arise and the riots that ensue.

Professor Dignam also explains legislative theatre. "We interact with the audience to find solutions to the situations performed in the plays. After each play has been performed they have the opportunity to stop the actors and try and persuade them to change their behaviour – or even swap places with them on stage.

"Finally, a bit like parliament they will vote for rules which we will then present to companies and government departments. This is not just a public engagement project we are trying to come up with policies that might make a difference."

The plays are free to attend but registration is required. For more information on dates and times see our event page for Human Rights, Bloody Human Rights - A business and human rights workshop