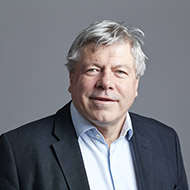 Richard Walters has taught tax law at undergraduate and postgraduate level since 2013.

Until 2011 he worked as a Senior Civil Servant Lawyer in the Office of the Solicitor of HM Revenue and Customs, latterly as head of a team giving advice on property taxes and benefits and credits. During his time as a Government lawyer he was involved in many notable cases including eight House of Lords/Supreme Court cases and numerous judicial reviews. He was the lead lawyer in the Bill team which introduced Stamp Duty Land Tax and the reform of taxation of pensions.

Richard also worked on secondment at the Attorney General’s Office where his responsibilities included extradition and charities.